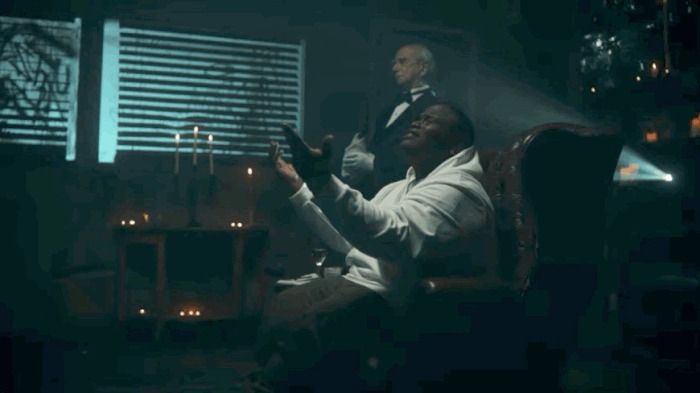 One of the biggest breakout stars of the year, Morray differentiates himself from the pack with the passion evident in his sharp lyricism and emotional singing. Hot on the heels of becoming an XXL Freshman for 2021, Morray shares the video for “Mistakes,” a highlight from his debut album Street Sermons. Produced by Dystinkt Beats & SephGotTheWaves, “Mistakes” finds Morray adjusting to his new life as a rap star, showing off his church-trained vocal runs as he promises not to forget where he came from: “Pockets full of hundreds, never thought that I could have it/Living my best life, stress free, finally happened/Don’t gotta cap shit, now I’m making it off of rapping/Eating good, went from ramen to Wagyu with my salads,” spits Morray.

Directed by Christian Breslauer, who teamed up with Morray for recent videos for “Can’t Use Me” and “Nothing Now,” the clip for “Mistakes” evocatively illustrates the themes in Morray’s lyrics. Morray starts the video in the confession booth, before he sits down for a conversation with his past self, showing him what could change in his life if he works hard and keeps at it. “Mistakes” is the latest in a line of high-quality visuals that started with “Quicksand,” recently certified GOLD by the RIAA, which peaked at #65 on the Billboard Hot 100 and in the Top 10 of both YouTube’s US Music Video Chart and the Urban Radio airplay chart.

After his meteoric rise that started with “Quicksand” and continued with Street Sermons, which debuted at #41 on the Billboard 200 and helped propel Morray to #1 on Billboard’s Emerging Artists chart, Morray earned a position on the coveted XXLFreshman list for 2021. The honor is the latest in a long line of accolades, including one to watch” designations from Complex, Billboard, SPIN, Pigeons & Planes, and many more.

With Street Sermons and his newfound position as a XXL Freshman, Morray culminates his meteoric rise and proves that he’s ready to build an artistic legacy and a nest egg for his wife and kids. For an artist with Morray’s talent, the sky is the limit.

Watch Morray perform “Quicksand” and “Can’t Use Me” on Jimmy Kimmel Live: https://www.youtube.com/watch?v=w3d8kX05fAI