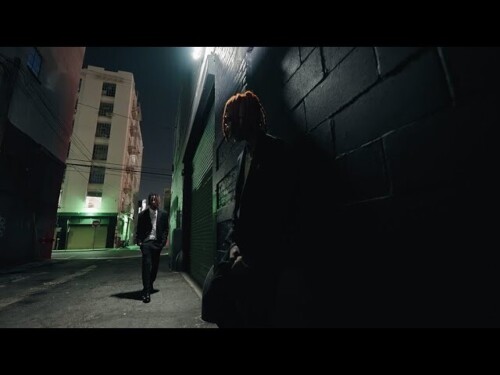 Fueling his mighty melodies with a bleeding heart, Dro Kenji has a sixth sense for painting vibrant, vivid pictures on any instrumental canvas. Dressed to the nines in search of a dime, Kenji teams with fellow rising star Ka$hdami to find the Bonnie to his Clyde in the new video for “KILL EM FOR ME,” a standout from his recent project ANYWHERE BUT HERE. Over ominously slowed guitar loops, Kenji croons about his desired partner in crime with a sense of lust and loss that grapples with accepting he can attain, but not maintain her: “She a angel, but she like to party with me/I’m the devil and she in the fire with me.”

The Declan Kyle-directed clip finds the pair sporting black suits beside a limousine in a dark alleyway, like an after-prom gone wrong. As the video progresses and Kenji sings his bass-thumping blues, a femme fatale emerges in brief obscured transitions, adding layers of depth and longing to their cold-hearted conundrum.

Home to the buzzing Mike Dimes-featured track “STEP BACK,” currently charting in Spotify’s U.S. Viral 50 chart, and and featuring appearances from fellow rising stars like Midwxst, Ka$hdami, and NoCap, the 13-track ANYWHERE BUT HERE captures the breadth of Kenji’s ever-improving artistry. On “SO WHAT” ft. DC The Don, Kenji injects his melodies with monstrous energy, while “CIGAR” captures a fatigued ferocity as Kenji howls his heartache at the moon. When presented with cinematic instrumentals from Internet Money producers like Census and his MiraTouch label head Nick Mira, Kenji rises to the occasion, belting lovelorn relationship tales and diabolical flexes through his full-bodied tenor.

Just 20-years-old, Dro Kenji is racking up over 3 million streams per week on his sizable discography. Determined to hustle his way to new heights, the young rapper is improving with every release–ANYWHERE BUT HERE arrives as Kenji’s third of 2022, following WITH OR WITHOUT YOU and the recent LOST IN HERE EP, which arrived on DSPs earlier this month. The South Carolina native is following up a breakout 2021, during which he released two albums and the hit single “KILL CUPID” ft. $NOT (20+ million Spotify streams). He was a standout performer at this year’s SXSW, performing at multiple showcases including Rolling Loud x RapTV‘s extravaganza at Stubb’s.