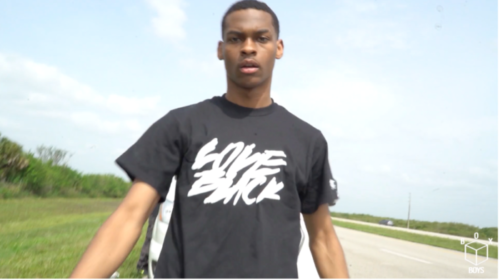 Equally adept at spinning fast-paced rhymes as unleashing soaring melodies, Virginia’s yvngxchris is a special talent. Taking time to bask in the light of his youthful success, Chris shares “Giig”, his new music video. Produced by CXDY & ThankYouWill, who layer thumping 808’s with a candy-coated experimental instrumental, “Giig” gives the 17-year-old rapper the opportunity to show the full breadth of his abilities. In the video directed by Box Boys (KA$HDAMI, Lil Pump), Chris gives fans a day-in-life of his life on the Tecca Loves You Tour splitting between images of Chris interacting with fans, to live show footage of Chris stage diving in packed venues.

“Giig” is the rapper’s second effort following his hyper-melodic “Ain’t No Fun” and the announcement of his upcoming project VIRALITY. Laying as the foundation to his new wave, VIRALITY is Chris’ most self-assured and versatile body of work yet, delivering bangers his fans expect while showcasing a facility with atmosphere and melody. Featuring production from Dylvinci, MathiaStyner, and others, VIRALITY arrives August 19th sandwiched with Chris’ headlining performance in Cleveland, Ohio, and a co-headlining tour with fellow riser SSGKobe.

As one of Virginia’s most popular rising new stars, yvngxchris made his name on SoundCloud, building a loyal following and earning millions of plays on each track. Signed to Columbia Records, yvngxchris drew mainstream recognition with the release of “off the leash!” with Tana (formally Baby Santana) and Luisss, which earned hundreds of millions of streams on all platforms including 25 million on Spotify and Chris created another splash with the release of “bitch im joe biden” which accumulated over 9 million streams on Spotify alone leading up to his Somethings In The Water Festival performance this summer as well as Rolling Loud New York this fall.