Knocked Loose are known for their relentless touring schedule. But when the pandemic brought live music to a halt, the Louisville, Kentucky, hardcore band made the best of it by heading for a secluded rental cabin in the mountain resort town of Pigeon Forge, Tennessee, to write their next record.

“This was the first time we’d ever gone into a record having a vision of what it was going to be it,” says guitarist/vocalist Isaac Hale, who stopped by Rolling Stone‘s Twitch studios with the band to scream through some blistering tracks from their surprise-released new EP, A Tear in the Fabric of Life, and 2019’s A Different Shade of Blue.

“Everything stopping and shutting down for a year gave us the opportunity to do something that was a little bit more withdrawn,” adds vocalist Bryan Garris. “We wouldn’t have wanted to take the break [from touring] to work on something like a passion project…[It] just snowballed into, like, let’s do a concept EP, let’s do a story, let’s do an animated video.”

All 199 of Taylor Swift's Songs, Ranked

The resulting record and animated film have helped confirm Knocked Loose’s place in their genre alongside peers like Baltimore’s Turnstile, Santa Cruz’s Drain, and New York’s Show Me the Body. Their perspective differs from their coastal hardcore contemporaries, though, with influences rooted in Christianity, country music, Pet Sounds-era Brian Wilson, and, most surprisingly, house music. “We’re very into house music,” Garris says. “It was like we were playing our music during the day and then at night, just blaring house music.”

Although the band’s output may not evoke a dance floor, their live show leaves little to the imagination. Bodies flip off the stage as dozens push and punch their way through the pit. Hale describes it simply as “chaos.” Garris adds, “This is where we came from, and it just makes for more of an exciting show. I believe that you should enjoy the show however you want, and if that means jumping off stage, so be it.” 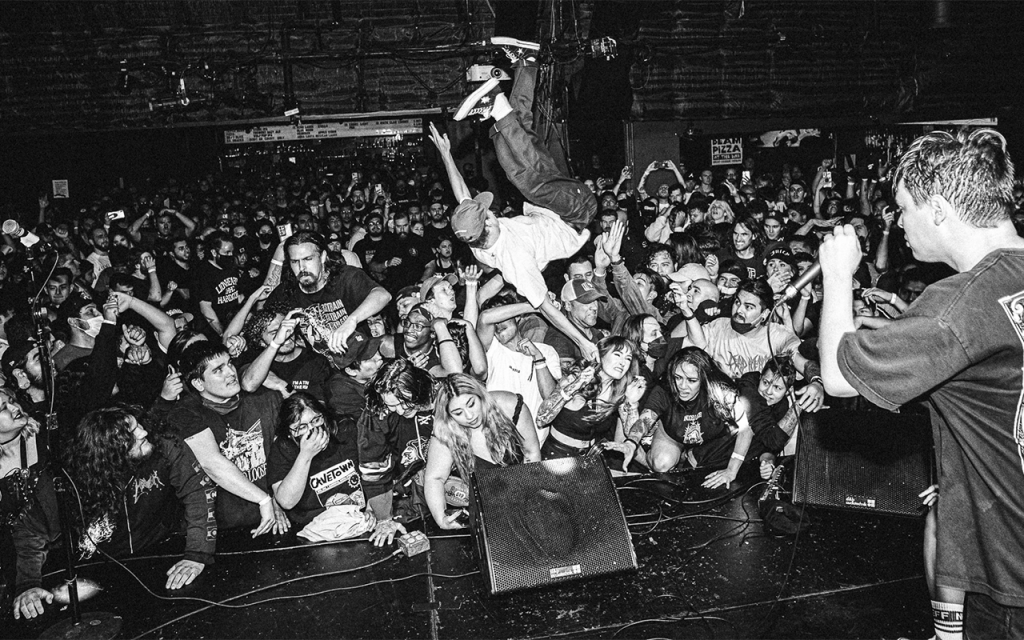 Though you won’t see Garris himself leaping off stage (“I don’t personally jump off stages; every time I have, I’ve gotten hurt,” he notes), the band’s break from touring gave them ample time to plan their first headlining tour in the fall of this year. “No barricade, just intimate, packed shows. And we definitely achieved that. It was such an exciting way to come back…there was no stress about it. It was just like, today will be sick,” says Garris.

While their fall tour saw them bringing along fellow hardcore metal bands Gatecreeper and Magnitude, their current tour has Knocked Loose opening for famed metal veterans Gojira. Performing in larger venues with more established acts has forced the band out of their comfort zone. Instead of performing inches away from screaming fans on stage, they’ve played behind barricades and, in one instance in North Carolina, they’ve performed for a seated theater. “It was still really good. We had a mosh pit in the aisles,” says Garris, adding, “We like playing to a different crowd…and I credit Louisville for shaping us with those ethics.”

The band doesn’t seem to be in any rush to slow down, either. “We’ve been out for two months now and two tours back to back, right off the bat. It’s nearing the end, and all of us are already like, we could keep going,” says Garris.

Following their tour in support of Gojira in November, Knocked Loose will bring their energetic live show on a headlining tour of Europe beginning in February 2022.

To stay up to date on live performances from Rolling Stone’s studios, be sure to follow Rolling Stone on Twitch.