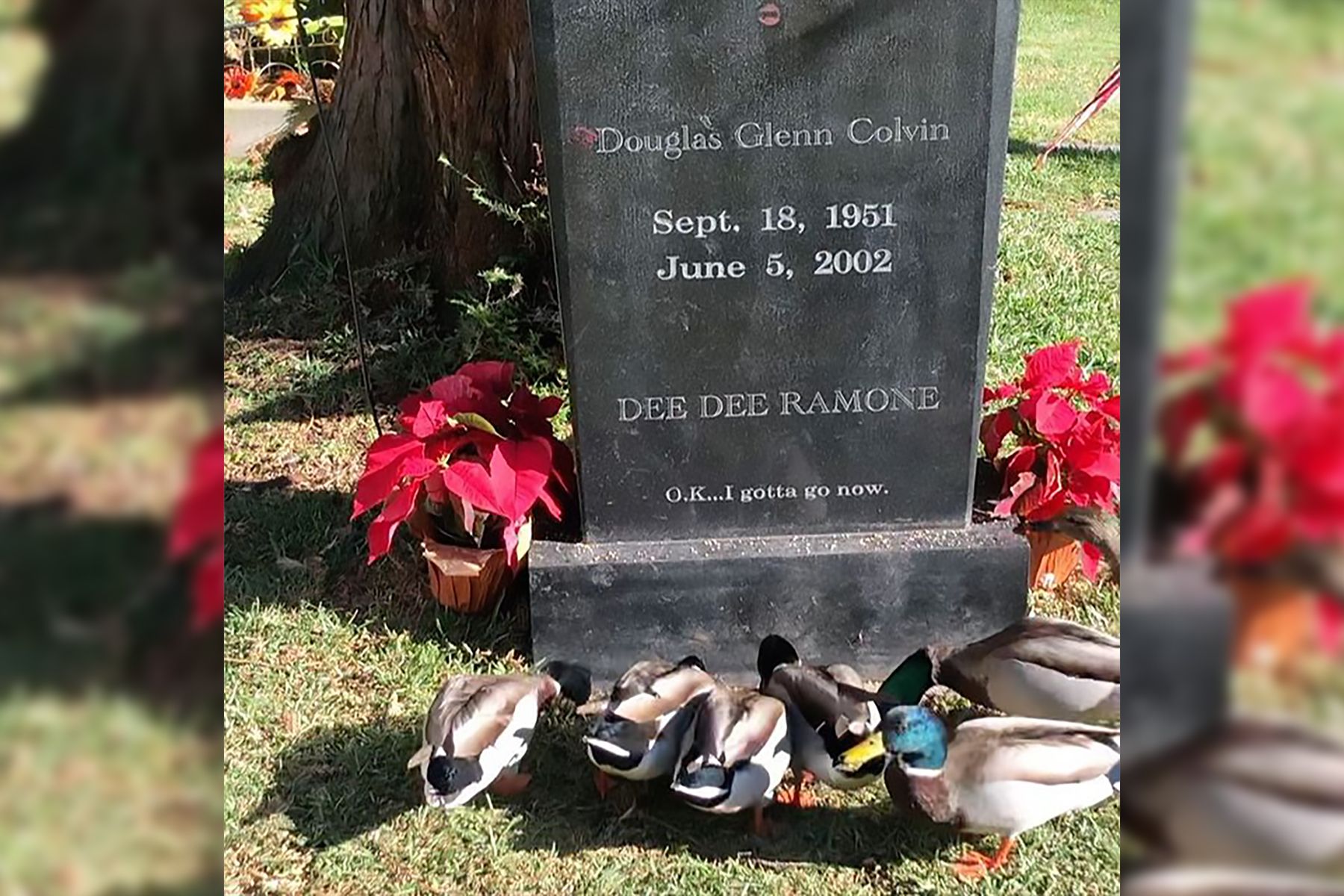 Dee Dee Ramone specifically wrote that he didn’t “want to be buried in a pet sematary,” but that didn’t stop L.A. musicians/artists Coyote Shivers and Pleasant Gehman from turning his grave into a wildlife buffet and documenting it all on Instagram account Ramones Ducks.

According to Shivers (who you may recognize as Berko from cult film Empire Records), he and his partner, Gehman, have been feeding the ducks since the pandemic started; they launched the Instagram this past summer. “Everything was closed, even the beaches and parks, so we would go to the cemetery to get away from the negativity, and feel some air and beauty and care for some of the urban wildlife that live there: ducks, geese, feral cats, squirrels, doves, swans, etc,” he tells Rolling Stone.

“It was a joy — it felt pure and was so much fun,” Gehman adds. “When things opened up, people started to notice what we were doing.”

The animals came to include five black ducks that their friend had raised, only to be forced off the property by the friend’s landlord. The ducks were very domesticated, so Shivers and Gehman trained them to visit Dee Dee’s grave every day. “We started calling them the Ramones Ducks because they’re all black and they stick together and stood out like a gang and they’d run up to Dee Dee every day,” he says. Their names, of course, are Johnny, Joey, Dee Dee, Tommy, and Sheena.

Dee Dee, a.k.a. Douglas Colvin, died of a drug overdose in 2002 at age 49; Joey died a year before that, Johnny died in 2004, and Tommy passed in 2014. Dee Dee is buried in Hollywood Forever Cemetary in L.A. in the Garden of Legends, according to Find a Grave.

Shivers says the ducks are fed every day using a “dinner bell,” which is essentially a new version of “Blitzkrieg Bop” called “Duckskrieg Bop” that features the ducks themselves quacking “Hey ho, let’s go.”

“And sure enough, it worked like the ice cream truck song in the summertime,” Shivers says. “The kids come running when they hear it.” Soon enough, more and more animals joined the party, as the fowl-filled Instagram shows, including peacocks, squirrels, cats, pelicans, geese, and, of course, the titular ducks. “By last spring, we started noticing the new mother ducks were bringing their days-old ducklings and teaching them, ‘When you hear this song, march up the hill to here,’ and we realized it was becoming generational to them. It just keeps growing, and little by little same with spectators,” Shivers says.

“We consider it part urban wildlife charity, part performance art installation, and part living tribute to the king Dee Dee Ramone,” he adds. “Everyone loves the Ramones Ducks. They bring nothing but smiles. Young kids and old punks really love it.” They also collect donations for food via the Instagram page.

“It’s fun for everyone and also helps children to love, respect, and care for animals,” Gehman says. “Plus, it shapes their musical taste by teaching them that the Ramones are the best damn band on the planet!”

One might worry that Ramone’s grave might get a little, well, messy given all the visitors, but Shivers says he and his friends take care to clean the plot; they even installed an astroturf mat to protect it. “We think it’s the coolest tribute to any rockstar ever,” he says.

Although Dee Dee doesn’t ostensibly have any connection to waterfowl, he did write the most famous song about monuments to passed pets of all time — the theme to the 1989 adaptation of Stephen King’s horror masterpiece Pet Sematary, about a burial ground that brings animals (and people) back to life. The chorus, of course, went: “I don’t wanna be buried in a pet sematary/I don’t want to live my life again.”

“On one hand, he gave us the entire plot of the movie, and on the other hand, he made it very personal,” director Mary Lambert told TIDAL in 2019 of the song. “Because Dee Dee had a really tough life and I can see why he might not have wanted to live it again. He was born in post-war Germany to a mother who was a German and a father who was a serviceman. It was really rough. He grew up really rough, and not in an especially loving and nurturing environment.”

Now, however, that his grave is a haven for L.A. wildlife, perhaps he wouldn’t have minded the company.