The three-day digital celebration, aligning with NYC Pride weekend, will be livestreamed from the PMC Studio in Midtown Manhattan beginning June 25th and running through June 27th. The event’s lineup will feature an array of performers and interview guests from across the LGBTQIA+ community — many of whom will be appearing live in-studio for the festivities now that New York has fully reopened.

Led by the daily hosts of ‘Rolling Stone on Twitch’ — Tia Hill and Jon Weigell — the event will also feature a number of Rolling Stone staff members, including senior designer Kyle Rice, staff writer Sage Anderson, and digital editorial director Jerry Portwood, all of whom will host discussions on queer issues and perspectives in music, culture, and journalism.

'In My Room' With Joy Oladokun 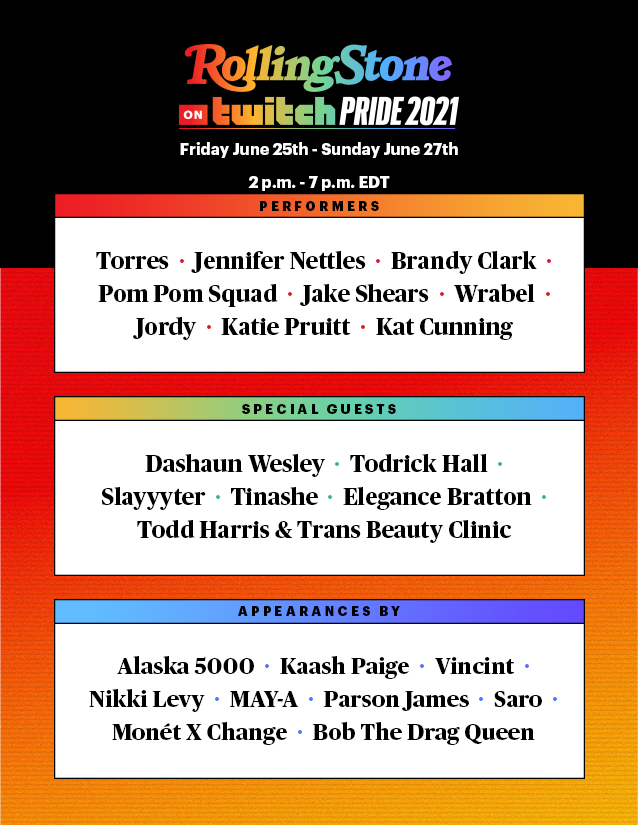 Day one will feature performances from Torres, Jennifer Nettles, Brandy Clark, and discussions with Legendary star Dashaun Wesley and rapper Todrick Hall. Day two will see performances from Pom Pom Squad, Jake Shears, and Wrabel, with appearances by Slayyyter and Tinashe. On day three, we’ll round out the weekend with live sets from Jordy, Katie Pruitt, and Kat Cunning, and panels with Elegance Bratton and Todd Harris of the NYC Trans Beauty Clinic.

Special video appearances are expected from some of the biggest names in the queer community, including Alaska 5000, Nikki Levy, Kaash Paige, Pabllo Vittar, Vincint, Monét X Change, Bob The Drag Queen, and more.

The event can be viewed live exclusively on Rolling Stone’s Twitch channel, from 2 p.m – 7 p.m. EDT daily this Friday through Sunday. Check out the channel page for more information on scheduling. Follow us on Twitch to join the discussion in the chat and subscribe for exclusive bonuses. You can also join the discussion 24/7 on our official Discord channel, which will be the destination for all things Pride 2021 during the celebration.