Robert Pattinson had a dream. In isolation, the former vampire and the current Batman was ruminating on a business plan that should be foolproof. It began with two simple questions: “What if] pasta really had the same kind of fast-food credentials as burgers and pizzas” and “How do you make a pasta which you can hold in your hand?” His invention would be called the “Piccolini Cuscino,” he told GQ. In Italian, it means “Little Pillow.”

Throughout Pattinson’s recent cover story with GQ, it’s clear that he has no idea how to bring this dream to fruition. That is largely because he has the cooking intuition of a raccoon in a caveman’s body; the actor microwaves pasta, substitutes corn flakes for bread crumbs, binds his burger monstrosity with cheese, forms a sugar crust, and destroys a microwave by placing aluminum foil in it — all while on a videochat with a reporter watching his every move. “Maybe, like, a partner will just come along,” Pattinson hoped as the nation looked on as he floundered to pitch his business like an average contestant on Shark Tank.

Pattinson’s experiment was a disaster, and the world is no closer to a fast food handheld pasta chain. But what if a person who doesn’t, in his words “eat like a wild animal. Like, out of a trash can,” tried to perfect the pasta burger? There would be no cornflake or sugar crust. No appliances would be destroyed. The quest wouldn’t be easy, but the goal was simple enough. Is it possible to make a pasta burger? Other publications, most notably Mel Magazine, have tried reproducing Pattinson’s concoction. So far, the results seemed to indicate that another method would need to be taken to make pasta a true handheld experience. What follows is my attempt to contribute to the scientific inquiry that is: What if you tried to make Robert Pattinson’s burger at home?

My plan for the burgers was simple. I’d boil two types of pasta (Rotini and Penne) for 20 minutes until they were well past al dente, cool them down in the freezer, throw each in a NutriBullet, and make a patty. That plan immediately went off the rails.

What no amount of Top Chef or Great British Bake-Off episodes can prepare one for is the reality that cold, boiled pasta is not meant for a NutriBullet. The shards of noodle quickly began to stick to the walls of the plastic NutriBullet cup and, when scooped out of the blender, immediately coated my hands in a glue-like casing. As I tried to roll the pasta shards into a patty, my fingers would just stick to each other. Why Pattinson needed layers of cheese to bind pasta together is beyond me. Gluten is nature’s perfect binding agent.

While I was washing my hands after the first failed attempt, Sushi, my cat, knocked over the first batch of noodles in an act of defiance. He had a point. For my second try, I coated my hands in olive oil, which made the dough slick enough to form patties about the size of your average McDonald’s quarter pounder. We had our first success, of sorts. The next step was trying to give the patty a crunchy exterior like a fried chicken sandwich. Pattinson suggested sugar — “It really needs a sugar crust,” he told GQ — but that seemed like an ill-advised way to impart a crust upon any food that isn’t dessert. 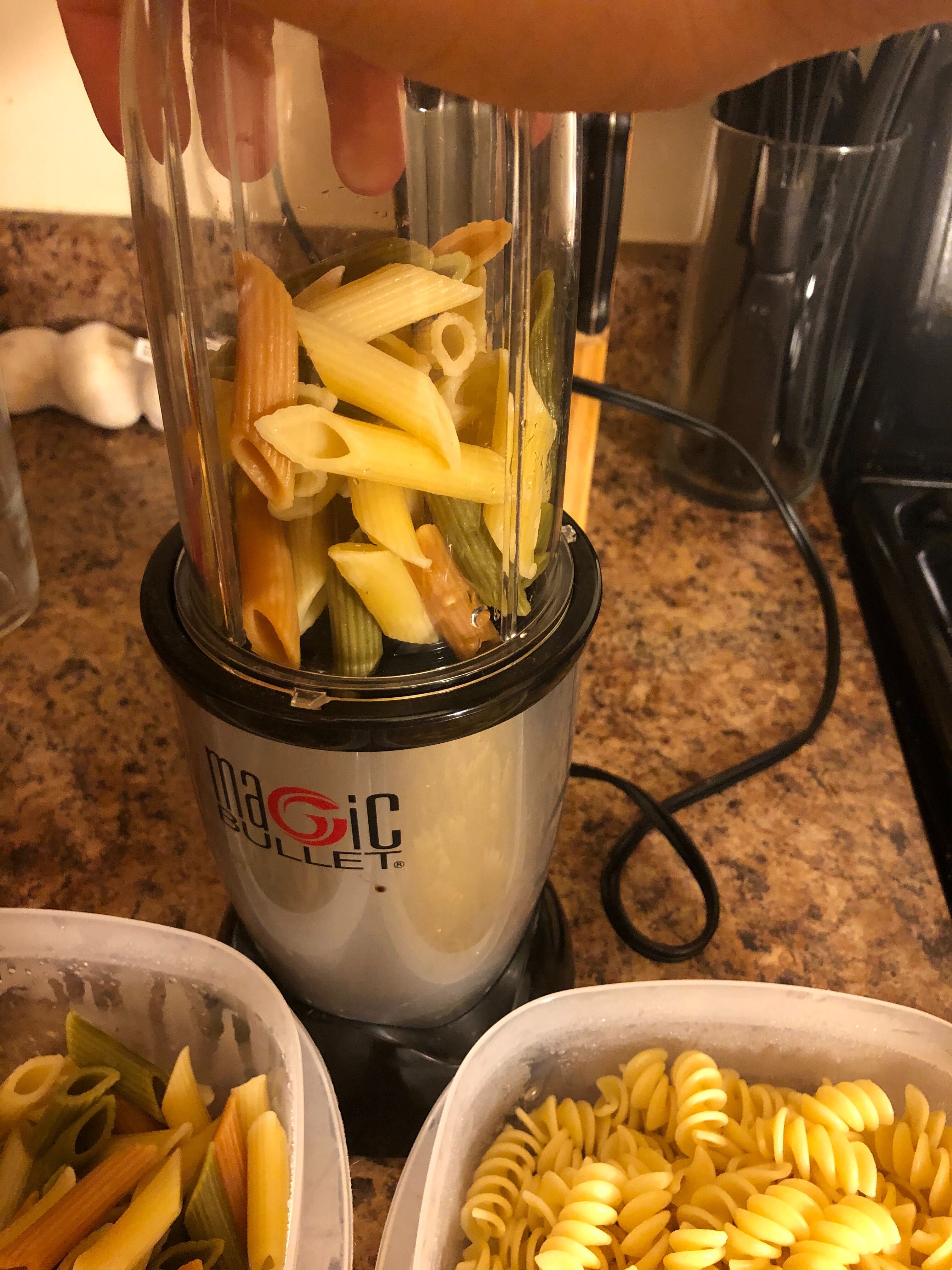 First, I placed a large pot of vegetable oil on the stove and let it heat up as I formed the rest of the patties. Then I whisked two eggs, and set aside a bowl of flour and Italian breadcrumbs, by which time it dawned on me that essentially I was coating one carb (pasta) in another carb (breadcrumbs), frying it, and then sandwiching it between more carbs: burger buns (It took a close reading to realize that Pattinson did use buns, and did not mean for the pasta to be the bun). Perhaps unwisely, I continued my quest, dipping the pasta patties in egg, flour, egg again, breadcrumbs, before frying each side for 2-3 minutes until golden brown. I let them rest on paper towel. 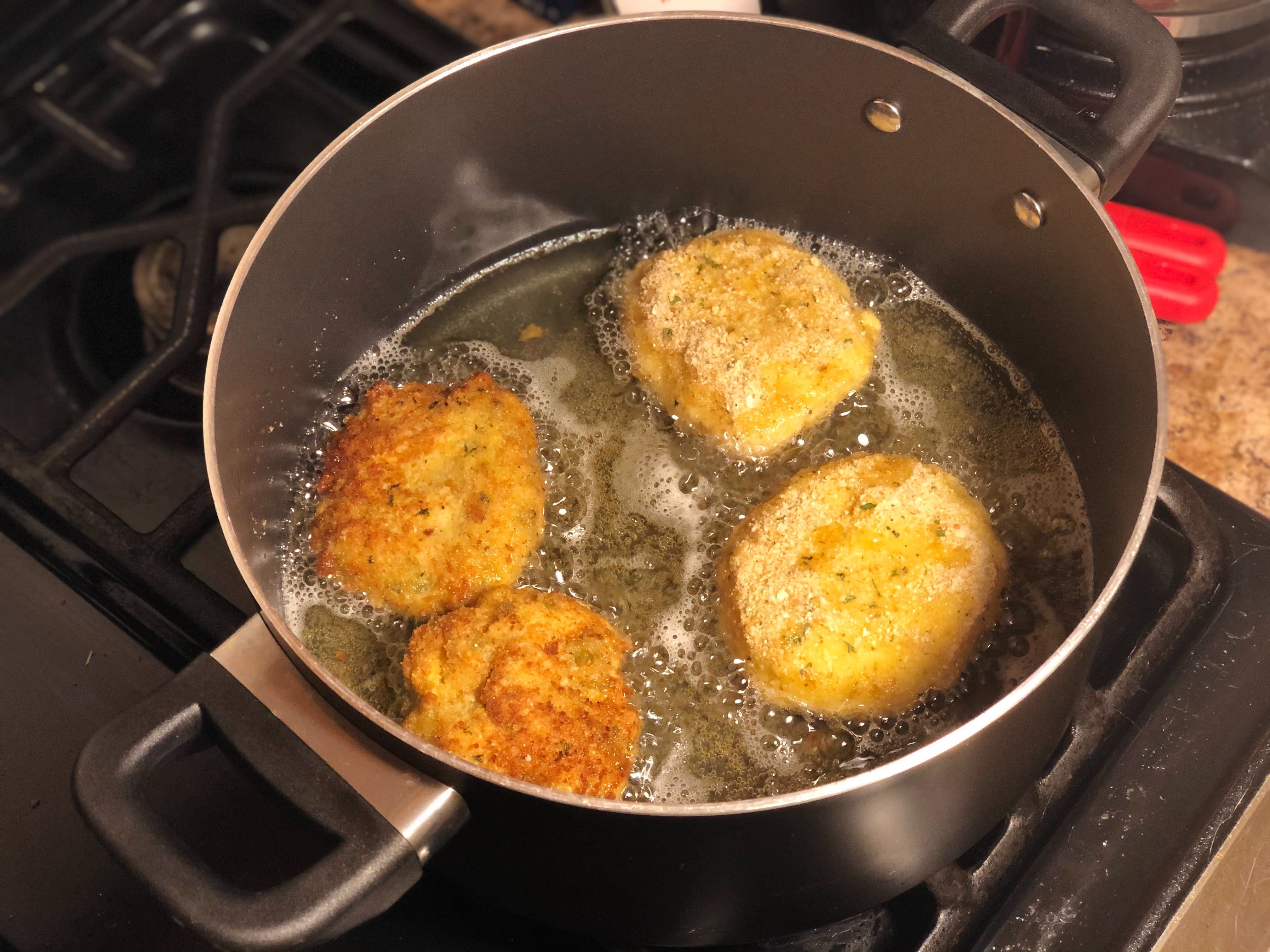 What one must understand about a pasta burger is the sheer weight of a pasta burger. It’s not comparable to any burger I’ve held before: beef, turkey, veggie, salmon. In hand, the sticky gluten brick feels as heavy as a hockey puck. If dropped, it could elicit a thump that could be heard from another room. Pattinson cannot in good faith call his new invention a “little pillow.” It is far closer in weight to a cinder block.

It’s also nearly impossible to accurately describe the taste, sensation, and mouthfeel of a pasta burger. In many ways, it’s deceiving. As I lifted the burger to my lips and took a first bite, the crunchy exterior was as pleasant as a warm crab cake. Yet the pasta burger had no further delights to offer. Swiftly, a gelatinous monsoon enveloped my mouth. From every angle, my tastebuds were assaulted with the sticky texture of fried mush. A paste of carbs consumed my mouth and threatened to suffocate my esophagus. In a late attempt at self-preservation, I tried to spit out every last ounce of what had just entered my mouth, but bits and chunks of pasta stuck to the roof of my mouth. 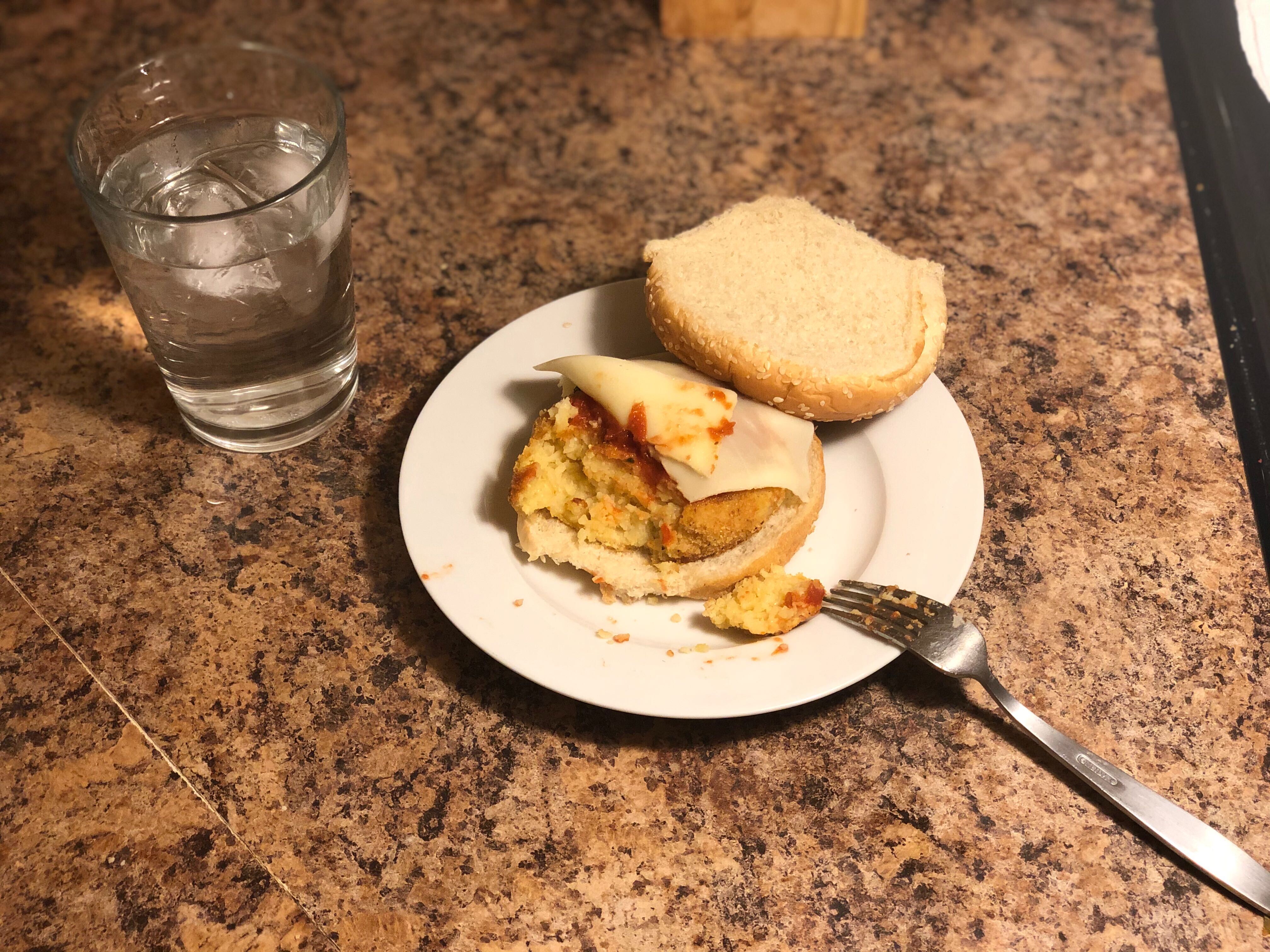 A glass of water was my only salvation. Sushi’s yellow eyes looked on in disgust. The knocked over pasta was his warning that I foolishly didn’t heed. After the oil had cooled, my mouth regained its normal taste, and the four pasta burgers were sequestered from sight, the reality of the situation settled in.

Pasta burgers are an abomination. No amount of wizardry can change that fact. Whether they’re coated in sugar and corn flakes or fried like a chicken cutlet, the results will always be the same. Pasta was never meant to be handheld.