Fifty years after Jim Morrison’s mysterious death in Paris, enough books on the Doors have been published to fill several shelves at your local bookstore. John Densmore and the late Ray Manzarek wrote their memoirs, numerous biographies are on the market, and a few months ago, a coffee-table volume of Morrison’s lyrics, poetry, and musings arrived. The one band member who’s resisted relaying his version of events is guitarist Robby Krieger, but that silence ends with the publication of Set the Night on Fire: Living, Dying and Playing Guitar With the Doors, co-written with Jeff Alulis. The book hits shelves on October 12th.

In the memoir, Krieger unearths his memories on the rise of the band, Morrison’s notorious arrest for public exposure in Miami, the recording of the band’s albums — including the final, L.A. Woman — Morrison’s death, and how the surviving band members coped. Krieger addresses various myths and legends, including the band’s controversial appearance on The Ed Sullivan Show on September 17th, 1967. At the time, way before MTV and YouTube, Sulivan’s weekly variety show was a major outlet for pop acts looking to reach as many people as possible. But was it the calamitous appearance that legend (and Doors movies) have had it? Read on for an exclusive excerpt from Krieger’s book.

Hear the Doors' Long-Forgotten, Raw-Sounding 'Riders on the Storm' Demo

The Ed Sullivan Show was an American institution — a signpost for entertainers that read, “You Have Arrived.” Or at least that’s what it was when Elvis, the Beatles, and the Rolling Stones made their first appearances. By 1967, Ed seemed corny and out of touch. It was a show your parents watched. But it was still an institution, and still a signpost we wanted to pass.

On the outside, we played it cool, but in the privacy of our dressing room we were giddy. We were in New York City, in the CBS studios, on Broadway, about to be transmitted into millions of living rooms. We had done TV before, but only local channels. This was our first national broadcast. For some reason, I channeled all my pent-up excitement into entertaining my bandmates with my impression of Curly from the Three Stooges. I dropped to the floor and did that thing where Curly makes whooping noises and “runs” in a circle on his side. That’s when Ed Sullivan happened to walk through our dressing room door. 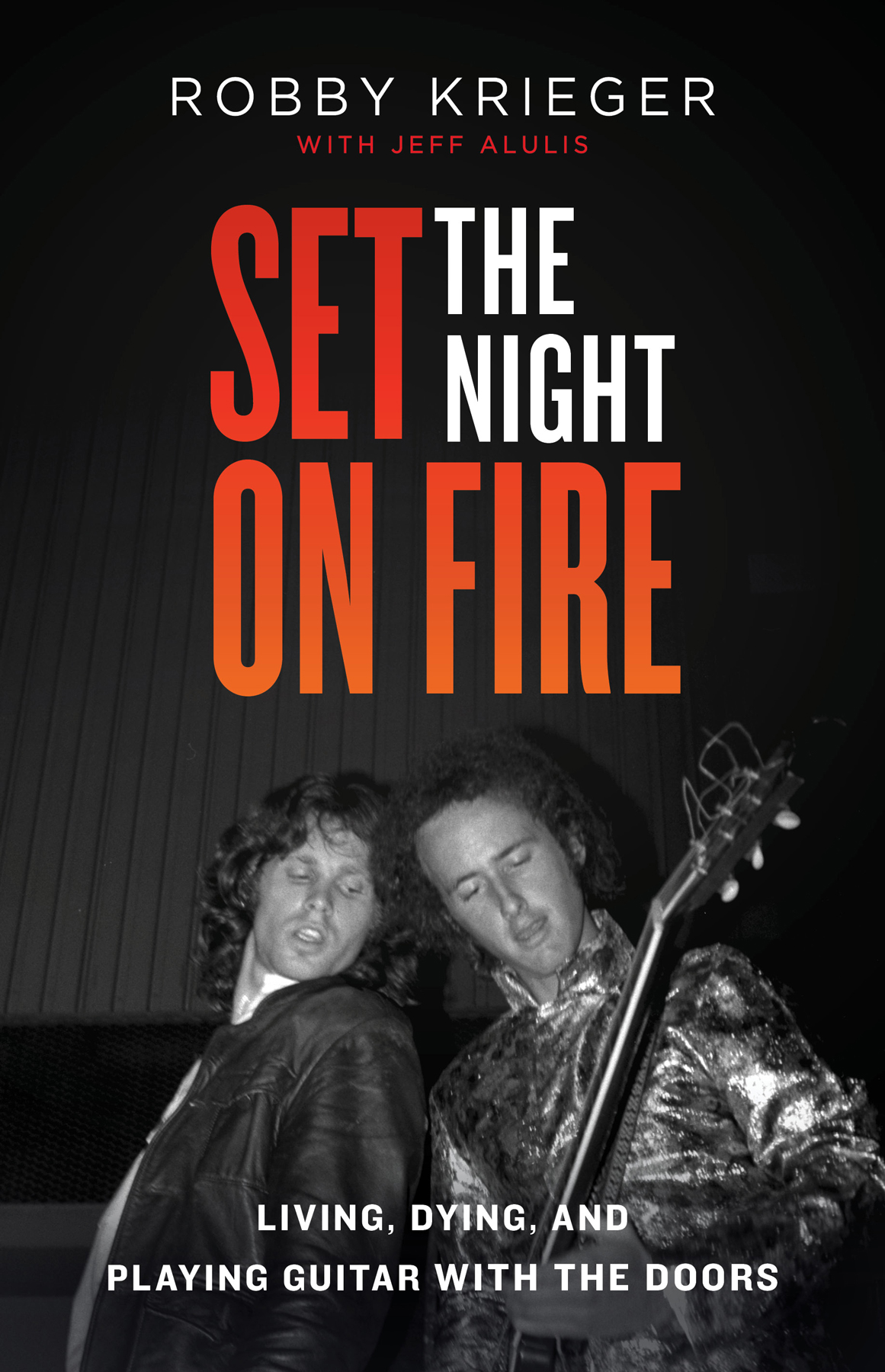 We had done a rehearsal earlier; Ed was stopping by to wish us luck before going on the air. Ed caught the Doors in a rare moment when our guard was down and we were all laughing. Seeing our lighter side inspired him to tell us how good we looked when we smiled, and that we should wear those same big smiles when we went live.

”Live” was what made our Sullivan appearance stand out. Most of our previous TV performances had been lip-synched, which was lame, but it was just how music shows were done back then. And all of them had been recorded ahead of time, which came in handy when Jim didn’t show up to a taping of a short-lived show called Malibu U, hosted by Ricky Nelson. Ray, John, and I were sitting on Leo Carrillo State Beach, surrounded by actors and crew members staring at us and checking their watches. A fire truck had been brought in as a backdrop and all our instruments were set up on it, but we had no lead singer. Being on TV was a big deal for us back. We couldn’t believe Jim had stood us up. After a while we faced the reality that Jim wasn’t coming, so we played “Light My Fire” while my brother Ronny faced away from the camera and did his best impersonation of Jim Morrison’s back. The next day the crew tracked down Jim and filmed him singing while wearing Ronny’s shirt. The whole incident seems more absurd every time I think about it. Can you imagine Mick Jagger not showing up for a TV taping and the Stones filming Keith Richards’s brother from behind instead?

We had also done Dick Clark’s American Bandstand, which, like Sullivan, was struggling to stay hip as the Summer of Love changed the cultural landscape. Dick greeted us in our dressing room before the taping, and he was friendly and welcoming. But he swore like a sailor. He wasn’t angry or bitter; it was his awkward attempt to seem cool. Being on Bandstand was, overall, a surprisingly forgettable experience. But I’ll always cherish the memory of hearing Dick Clark repeatedly say “fuck.”

Since Clark and Sullivan were the old guard, we were more excited about appearing on The Jonathan Winters Show. Jonathan hadn’t built up a legacy like Sullivan or Bandstand, but we loved his frantic, unpredictable comedic style. Which is maybe why our frantic, unpredictable lead singer launched himself into a piece of scenery and tangled himself in a bunch of rubber webbing at the end of “Light My Fire.” But Jim was out-crazied that night by our host. At the end of the show, Jonathan came out and improvised a monologue for the studio audience. Among other things, he took out a folding carpenter’s ruler and bent it into different shapes like it was a balloon animal, pretending it was a puppy dog or a machine gun. It was cool to see him do some unpolished comedy, but he went on and on, and soon the crowd started to thin out. For over an hour he never let up, even though people kept leaving. We hung out and watched him out of morbid curiosity to see how long he could go. Eventually, the entire audience had disappeared. The cameras were off. He was making jokes to literally no one. I don’t even remember him stopping. As far as I know, he stayed there talking until the next week’s taping.

Our episode of Jonathan Winters aired later that month when we had a gig at the Winterland Arena in San Francisco. Back then, of course, there was no way to record a show and watch it later. So in the middle of our set, Bill Siddons brought a TV onstage. We stopped playing, put a microphone up to the TV speaker, and sat down to watch ourselves. We thought it would be a treat for the audience, but the screen was only about 19 inches wide. I doubt anyone past the first few rows could see or hear anything, so we just awkwardly watched the show and then awkwardly resumed our set. This was only a couple of weeks after our New Haven show when our fans had learned to expect the unexpected from the Doors. I don’t think any of them expected that!

When we played “Light My Fire” on Sullivan, we didn’t trash the set and we didn’t swear and we didn’t use my brother as a stand-in for Jim, and yet it was the most controversial TV appearance of all. The narrative, according to the supposedly canonical Doors biography No One Here Gets Out Alive, is that a producer told us not to sing the word “higher,” and we all conspired to contravene the order after the producer left the room. According to Oliver Stone’s movie The Doors, Jim mugged for the camera and over-enunciated the word “higher” on-air to protest the attempted censorship. According to Ray’s autobiography, the producer shouted at us after the show and told us we’d never play Sullivan again, and Jim coolly replied, “Hey, man. So what? We just did the Ed Sullivan Show.”

But in the dressing room, we weren’t offended by the suggestion to change our lyrics: we thought they were joking. “Light My Fire” had been number one for weeks, playing on every major radio station around the country. We had performed it on half a dozen other TV shows. No one cared about the word “higher.” They couldn’t possibly be serious. As for Jim’s delivery, the original footage is out there and you can see for yourself how he hardly moved for most of the song. Jim never moved on TV the way he did at our concerts. The bright lights and the cameras and the artificial atmosphere of a TV studio always made him feel self-conscious. We never conspired about not changing the lyric ahead of time, and we never talked about why he didn’t change it afterward, but my guess is he was just nervous. It was Sullivan. It was national. It was live. He went into autopilot and sang “Light My Fire” the same way he had a million times before. He may not have even been listening when they suggested the change, but if he did do it on purpose, it was probably because he didn’t think it would be a big deal. [Doors Manager] Bill Siddons might’ve gotten scolded by the show’s staff when we weren’t around, but I don’t remember anyone yelling at us or telling us we’d never play Sullivan again, and I definitely don’t remember Jim’s perfectly scripted badass response to the frazzled, square producer. The way Ray told stories, I’m surprised his version didn’t end with us strutting in slow motion down Broadway while the CBS studios exploded in the background.

The other thing the retelling of the Sullivan Legend always gets wrong is my smirk. After Jim sang “higher,” the camera cut to a shot of me and Ray, and people have since interpreted the look on my face as a sly grin in reaction to Jim’s act of defiance. In truth, I was just the only member of the band who took Ed’s preshow advice to smile. It wasn’t until long after the show aired that I was finally able to see a clip of our performance. Ray, John, and Jim all looked so cool, playing on that historic stage with their serious, stoic faces. And there I was . . . smiling like an idiot.

Travis’ ‘Sing’ Was Originally About Swinging in the Park