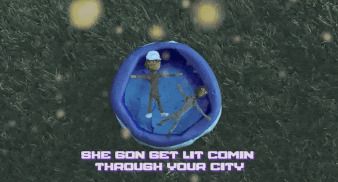 “Whipski” arrives as $NOT prepares to return to the stage for the first time since February 2020 for a short-run tour in his home state of Florida. Though he performed songs from Beautiful Havoc during a Rolling Loud Loud Stream, the upcoming dates mark the first time any songs from the album will be performed in a truly live setting. The upcoming 4-date tour makes stops in Tampa, Orlando, Jacksonville, and Lake Park. Tickets Here: https://snot.xyz/tour

“He’s well on his way to being one of the next independent rappers to make a mainstream splash… $NOT’s got a very particular kind of charisma, and one single at a time, everything’s clicking.” – Pigeons & Planes

“With Billie Eilish and ‘Euphoria’ co-signs, rapper $not is a Gen Z star in making” – Los Angeles Times

“Snot — stylized $not — is a quintessential South Florida SoundCloud rapper, brimming with the sarcastic, devil-may-care attitude of his peers with perhaps a bit more polish.” – UPROXX

A misanthropic introvert with expert pop instincts, Florida rapper $NOT is quickly becoming one of his generation’s defining voices. Known for wearing his signature hoodie, which he wears wrapped tight around his face, $NOT has earned co-signs from the likes of Billie Eilish, and his song “Billy Boy” appeared in an episode of HBO’s Euphoria. $NOT completed a successful tour in Q1 2020, selling out venues across the country. The 22-year-old rapper has released hits like “GOSHA” (100 million Spotify streams), “Moon & Stars” ft. Maggie Lindemann (36 million), and “Beretta” ft. wifisfuneral (20 million), and he’s currently hard at work on a new album to follow-up March’s – TRAGEDY +.