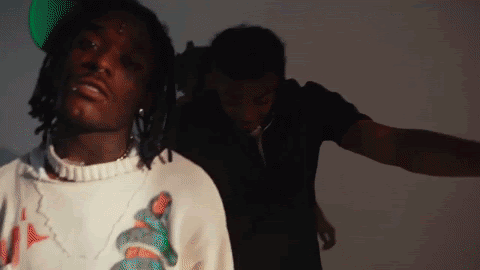 Today, South Carolina rap sensation NGeeYL releases his new single “Off-White” ft. Lil Uzi Vert accompanied by the music video – watch HERE. With the title being a reference to Virgil Abloh’s acclaimed  streetwear brand “Off-White”, the two rappers flex their rockstar lifestyles, designer drip, and flashy jewelry as they rage to the raucous beat. The video is kaleidoscopic in nature as the two dictate the track with their melodic flows and eccentric styles. The duo originally joined forces in the most organic way, through social media, after NGeeYL gained the attention of Uzi with the release of his mixtape Hiatus leading Uzi to shoutout him out on Instagram calling NGee his “favorite rapper”. From there, the two rappers forged a friendship that would translate into Lil Uzi Vert executive producing NGeeYL’s album to be released later this year and birth this first single “Off-White”.
Hailing from South Carolina, NGeeYL has an unforgettable sound composed of a unique monotone flow, lo-fi verses and trap beats, which have garnered attention from many of his peers. His last-length mixtape Live Ammo dropped last summer and featured notable tracks like “Real Smoke”, “Sweep” ft. Jetsonmade and “Kawasaki” ft. Lil Keed. Prior to that, his mixtape Hiatus featured the likes of Young Nudy and Valee and came alongside cosigns from 21 Savage, Playboi Carti, and notable athletes like football player DeAndre Hopkins and basketball player Zion Williamson.​​​​​Hiatus undoubtedly put NGeeYL on the map but his come up is far from over as he and collaborator Lil Uzi Vert take on this next project.