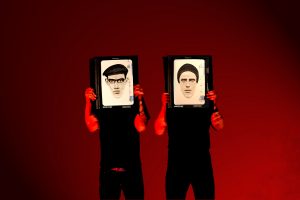 A Meat Beat Manifesto album is a thing of rare beauty; it encompasses so many differing styles and moods that it can sometimes be an overwhelming initial listen. However, once you have tuned into the sonic coda it grows and organically unravels to become something living, breathing and writhing. Jack Dangers has a knack for taking disparate styles and infusing them with his own distinct vision and sound. Every MBM record sounds vaguely reminiscent of but unlike anything else. The familiar is rendered alien in Dangers’ skilled production.

His new album Impossible Star pushes the boundaries of electronic music, experimenting with textures, rhythms and structure – some downtempo, some uptempo, some notempo.  A perfect example of this courage to experiment, to push boundaries arrives right at the beginning with the opening track “One” which is literally one note stretched to over 2 minutes.  “It’s basically very slowed down abstract sounds using 2 tape recorders to take it into unseen worlds” says Jack Dangers, “….you can do this with magnetic tape!”

Minimal, textural and cinematic in scope, Impossible Star follows the sonic innovator deeper into more experimental territory. From the thick and discordant soundscape of “One” to the cut-and-paste pastiche of “Bass Playa” with its deep and dubby cool jazz soundtrack that wouldn’t seem out of place in the chillout room (do they still have those?) of an urban club.

Other songs like “Unique Boutique” and the title track “Impossible Star” are closest to MBM‘s earlier material – more rhythm and beat-driven. Whereas “Synthesizer Teste” is an aural exploration that packs its survival kit and heads to the mountains.

Often using politics and cultural events as a starting point, MBM mastermind Jack Dangers connects the current climate to the creative direction of Impossible Star. “I suppose it would be similar to an MC Escher optical illusion which spirals around and around and never seems to end, which can be used as a metaphor of many current events and other pertinent things right now,” he says.

“MBM has always gone in many different directions,” Jack explains, “We Are Surrounded” and “T.M.I.” represent the paranoid xenophobic ‘so-called’ fake news cycle we are living in.  But seriously at this point, I really wouldn’t know what to say. We’ve entered a world of surrealism which is uncharted territory for me… or maybe it’s territory we’ve been through before in the ’30s?  What do I know… Further explorations are in the pipeline!”

Impossible Star is packed with funky fills, fluid improvisation and stabbing soul-jazz which gives way to industrial textures acting as a bed for intense vocal samples and breakbeat rhythms. It is a centrifuge of sound collages spinning into each other and scattering sonic dust to all corners. Dangers’ skill at orchestrating found sounds, vintage noise, obscure library samples and rich collages of rhythms gives flight to his experimental side.

“Rejector” is all colliding white noise and static roar, the sound of sonic fission tumbling heavily into the ether, whereas “The Darkness” is a sparse and haunted track that leaves much to the imagination while still displaying acres of production prowess. Throughout “We Are Surrounded” Dangers’ unravels trippy soundscapes with snippets of dialogue over a solid dub groove.

MBM‘s consistent musical invention has led to all forms of electronic musical experimentation over its 30 year history, from jungle and techno through industrial and dubstep to jazz fusion. Its long string of future-sound classics includes such groundbreaking tracks as “God O.D.”, “Strap Down”, “Psyche Out”, “Helter Skelter”, “Radio Babylon”, “Edge of No Control” to “It’s The Music”.

With tour dates being planned for next year, those familiar with MBM‘s incredibly immersive live performances are fully aware that the visual component combines a sonic electronic assault with stunning and often political video mash-ups. The visual “battles” waged between mastermind Jack Dangers and MBM partner-in-crime Ben Stokes will undoubtedly be provocative and incredibly timely with video samples culled from news reports and found footage.

Looking ahead to 2018 and the release of Impossible Star, Jack is cautious at best for what’s in store. “Well, I am afraid at this point it looks like it’s going to be fear… more fear… I got the fear… happy new year! <mis·in·for·ma·tion> is all we are gonna get now.”

Impossible Star will be released on January 19, 2018 via Flexidisc with distribution by Virtual Label.