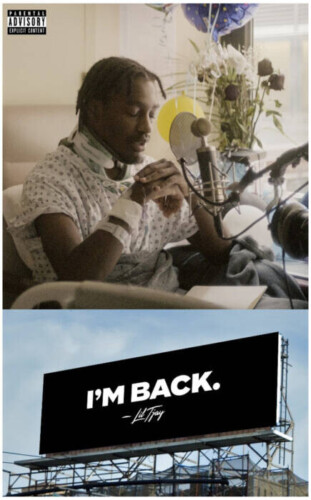 Lil Tjay returns with the new single “Beat the Odds” out today via Columbia Records. The song holds true life meaning as the 21-year-old platinum rapper’s quick rise to fame came to a sudden halt this June as he survived a near-death experience. Lil Tjay was treated for gunshot wounds after being shot 7 times including in the lung, and several times in the neck and chest.

“Beat The Odds” is the first song that Tjay felt inspired to record while in the hospital after the horrific incident. In the gripping music video, Tjay embodies perseverance and shows powerful real-life footage of him recovering in the hospital, while loved ones visited him as he began to heal.

The Lil Tjay-directed visual chronicles his release from the hospital and follows his journey to a beautiful church where he is seen reflecting on what he was able to overcome and how thankful is to be alive. As the true artist that he is, Tjay can also be seen pouring back into his music, as he is also depicted recording in the studio a mere 8 weeks since the life-threatening incident. Watch here.

“I’m thankful for the love and support I’ve received from my fans, family, and friends,” says Lil Tjay. “This has been a long road to recovery but I’m happy to have a second chance. Stay tuned…I’m back.”
FOLLOW LIL TJAY
Website | Instagram | Twitter