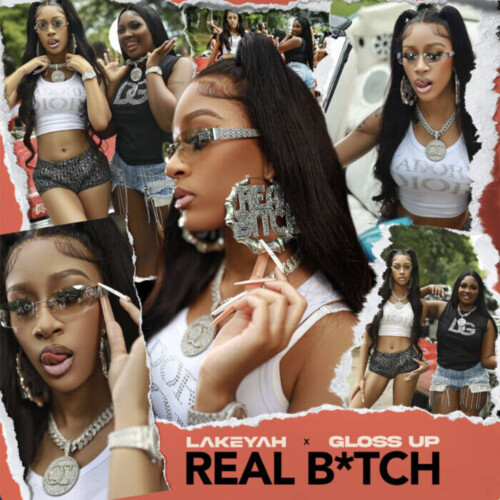 Milwaukee-born rapper, singer, and budding star Lakeyah is back with a new visually assisted single “Real B*tch” featuring Gloss Up, is out now via Quality Control Music/Motown Records. Hot off the release of her recent No Pressure Pt. 1 EP, this new track is further evidence of Lakeyah’s relentless work ethic as she continues to cement herself as one of the most exciting new names in hip-hop.

Since signing to Quality Control, Lakeyah has consistently fed her fans with music–releasing Time’s Up in 2020 and In Due Time in 2021–and landed a spot in XXL’s coveted ‘2021 Freshman Class.’ She originally gained attention in 2019 with a remix of a City Girls track for the viral “First Day Out” Challenge, which garnered traction online and caught the eyes of Quality Control Music and City Girls’ JT, who reposted her track. In early 2020, Lakeyah followed up with The Keymix II project, which introduced the world to her unmatched range, effortlessly swinging between aggressive, braggadocious rap and soulful, earnest R&B tracks. Later that year, she remixed Lil Baby’s “Sum 2 Prove” and “We Paid.” Again, her “We Paid” remix was quickly reposted by Lil Baby online, but this time Quality Control wasn’t waiting for someone else to recognize her untapped potential and signed her immediately. The momentum continues in 2022 with the recent release of her EP No Pressure Pt. 1 via Quality Control Music/Motown Records, which boasts the breakout single “Mind Yo Business” [feat. Latto]. With a unique style, natural talent and so much range, it’s clear that Lakeyah is a heavyweight to watch out for with no intentions of renouncing her title.