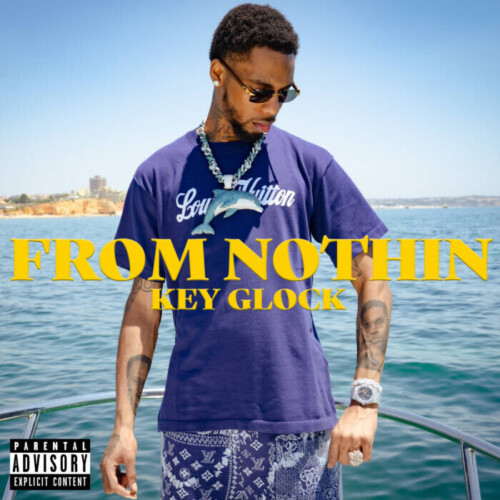 With his tireless drive for getting to the loot and natural talent for flexing his spoils, Key Glock was bound to make it by any means necessary. Returning to celebrate his rags-to-riches story, the Paper Route Empire artist shares his new video single, “From Nothing.” The track’s bouncy instrumental provides a sense of sunny summer relaxation, setting the stage for Glock to recount the mindset that led to a life of luxury.

The “From Nothing” video finds Glock at a sunny seaside getaway in Catalonia, Spain, though the clip makes it clear that this isn’t a vacation. As Glock and company live it up inside their hotel suite, Glock goes from oceanside lounging to spitting bars in a makeshift studio in the blink of an eye. This mix of business and pleasure marks an important distinction: anyone can hustle their way from rags to riches, but it takes a certain level of dedication to build and maintain.

“From Nothing” follows the recent single, “Diapers,” in the wake of Glock’s Yellow Tape 2 (Deluxe), released in March. The success of Yellow Tape 2 proved beyond all doubt that Key Glock is a standalone star in the truest sense. With the 20-track project, Glock cracked his first solo entrance into the Top 10 on the Billboard 200, racked up over 137 million streams on Spotify alone, and did it all without a major label or a single guest feature. In January, Glock paid tribute to his cousin, mentor, and friend, Young Dolph, with his potent tribute, “Proud,” which earned over 4 million views in its first three days, and received praise from The New York Times, among others. The track was featured on the recent compilation album, Paper Route Empire Presents: Long Live Dolph, where Glock appeared alongside his fellow PRE labelmates, and appears on Yellow Tape 2 (Deluxe).

Stay tuned to see what’s next from Key Glock and Paper Route Empire as the summer rolls on!

Wendy Williams Had to Be Reminded Multiple Times Her Show Was Ending: Insiders Share Details About Her Exit