Jerry Garcia and planned out only two things before each of the thousands of concerts they played together in the : The song they would begin with and the song they would end with. Everything else was decided in the moment. “While Jerry was singing, I had plenty of time to think about the next tune that I was going to do,” says Weir. “And while I was singing, he had plenty of time to think about what tune he was next going to do. We developed a feel for that.”

That formula made the Dead one of the most exciting and unpredictable live groups in history. “The overall arc of the evening then turns into something really quite akin to opera,” Weir says. “There’s an overarching story — though it may be nebulous, it’s still there. Some evenings have it stronger than others, and that’s just part of the luck of the draw. You can never predict what a night’s going to bring you, or what a given song is going to bring you that night, but you get a feel for it. The element of risk and reward is there for everybody.”

When the Dead & Company formed in 2015 — featuring guitarist Weir, drummers Bill Kreutzmann and , plus on vocals and guitar — Weir took a bigger role in crafting set lists before shows. “Bob’s the captain of that ship,” says Mayer. When Mayer joined, he had to entirely adjust how he approaches playing concerts. “I can’t miss an opportunity to give people what they think they want, the moment they want it,” says Mayer. “Bob calls me a classicist. I’m learning from Bob that sometimes if you fight the audience a little bit, you can ultimately make them happier.”

Often, they do go off script. “Sometimes he’ll look over at me and go, ‘That’s it,’ and he’ll cut the song right before,” says Mayer. “Sometimes he’ll come up to me and go, ‘Let’s do one more.’ And he always lands on all fours at all times. I’m very inspired by watching him. Bob’s just a great gambler when it comes to playing songs — and he fucking always walks away a winner, because he’s a maestro.”

When Rolling Stone asked the band to pick one of the most significant shows Dead & Company have ever played, they picked their February 26, 2018, gig at Sunrise, Florida’s BB&T Center. About 30 minutes away, less than two weeks before, a gunman killed 17 people at Marjory Stoneman Douglas High School in Parkland, the deadliest high school shooting in history.

Dead & Company invited students from Marjory Stoneman Douglas to the show. “That made it special right there,” says Weir. Many of the kids were new to the band’s music, a fact that made the band work extra hard to win them over. “We felt like we could do a little something, and bring them a little light after all the darkness that they had,” says Weir.

This week marks the two-year anniversary of that concert. Here, in an extended version of a piece that ran in the magazine in 2019, Dead & Company explain how they picked the songs. “I think everybody was really conscious, making sure that the songs lived on the side of the light and hope of catalog,” Mayer says. “Because there is that hybrid of life and death that exists in all these songs.” The band is touring again this summer; here are the dates.

Weir chose to start with this 1978 funky throwdown, hoping to win over all the new listeners. “It’s also a good song for feeling out the band,” he says. “The pacing is leisurely, and you can build up to the events and listen to other people, and get a feel for what everybody’s doing.”

Says Mayer, ” ‘Shakedown’ is one of these great compositions, where the form is pretty wide open, and it’s a great first song for everybody to get their sea legs. Everyone knows ‘Shakedown Street’ even if they aren’t Grateful Dead devotees. It’s a sample of songs, where if you were an interested person in culture, you’ll know what ‘Shakedown Street’ is. And it’s a really galvanizing song to play at the very beginning, to get everybody together.”

Weir still loves singing the story of birth and death that he wrote with John Perry Barlow: “It’s a nature poem, but with a couple of added extra spices in it. But it’s also a lot of fun to play because there’s some exploration we get to do, and it’s just fun.” 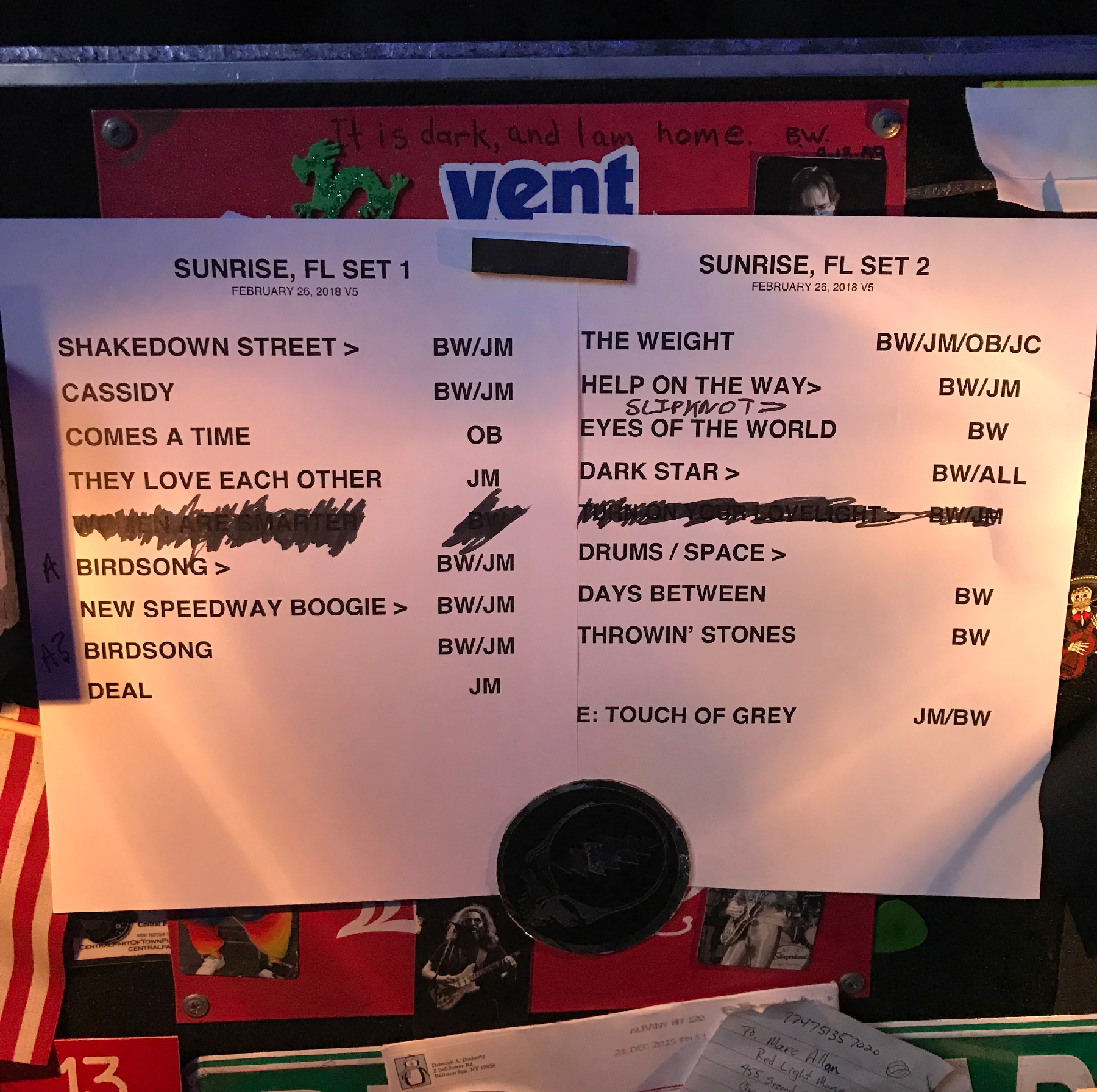 Bassist Oteil Burbridge steps in for Garcia’s vocal part on this soulful ballad, which has been in rotation since 1971. “He’s an ego-free singer, far more free than me,” says Mayer of Burbridge. “You can tell he’s singing from his heart and it’s not being filtered through mind and identity and brand, you know? I’ll never get away from that because I’m me. I’m shackled to that, but to hear him sing with that purity is, as a guitar player, so much fun to respond to. And then that solo is one of the more composed solos that Jerry played, and it’s really fun for me to just keep it locked in that real lyrical vocal play.” Adds Weir, “The song is also tinged with melancholy, which seemed appropriate for the evening.”

“I love the pop songs of the Grateful Dead,” says Mayer of this sweet, loping Garcia-Hunter original. He also likes playing it for a more practical reason: “It’s one of the few that really fit my voice. It doesn’t feel like a stretch as much as some of the other ones do. I can lean back and have fun with it, knowing that I don’t have to adhere too much to making sure I get it right, which is a nice break.” Adds Weir, “Also, it’s just fun to play.”

Garcia wrote this folky elegy for his friend Janis Joplin (“All I know she sang a little while, and then flew off”). “The emotional color of the song seemed appropriate for the evening,” says Weir. “At the same time, it’s uplifting.”

This Western gambler’s tale from Garcia’s first solo album has been one of the Dead’s most trusty crowd-pleasers since 1971. “The worst problem is the crowd won’t let me get away with playing ‘Deal’ without seeing how high we can take it,” says Mayer. “We can start ‘Deal’ in a very mellow way, and by the end of it, the crowd won’t let me get away with the song without taking it up. It’s a martial-arts demonstration at the end, but ultimately, I think I really like that. I think it’s great for the band, over the years now, to have developed a couple of songs in the wheelhouse that are known to be trusty one way or the other.”

“We’ve been actually attempting to do a more, shall we say, stately rendition of it,” says Weir. “And the crowd drags us into a fireworks display.”

The Dead toured Canada with the Band in 1970, and love breaking out “The Weight” from time to time. “There was a quality to the show of giving these kids a show that they would maybe later on in life get more out of,” says Mayer. “‘The Weight’] is a chance to relate to the crowd.” 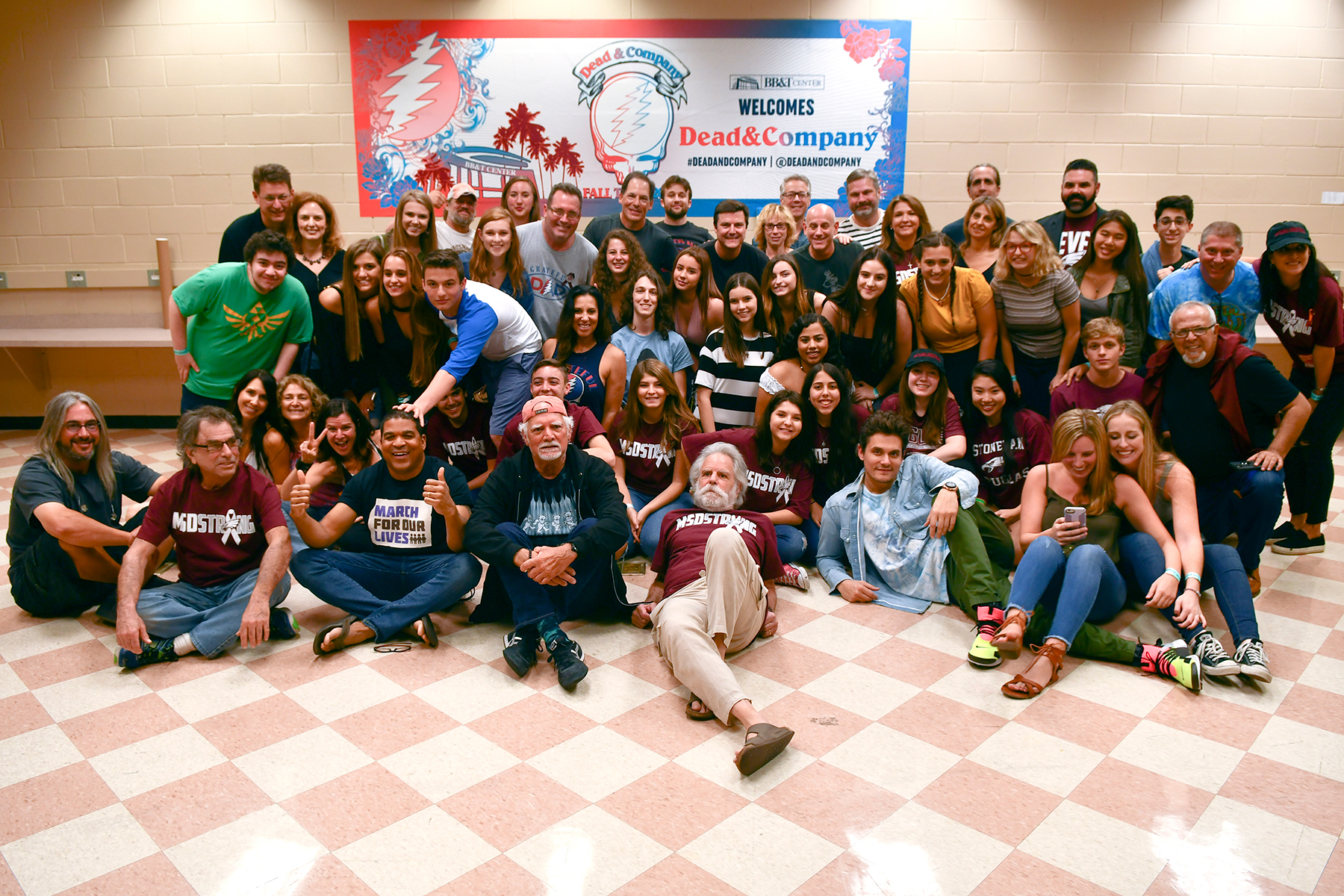 “It feels like a road trip,” says Mayer of the band’s dark suite that serves as the trippiest part of the show. “You’ve got your soda in the center console, you’ve got your beef jerky, you put your sunglasses on and go, ‘All right, let’s tear off 400 miles.’ ” Weir agrees: “Mickey Hart says that we’re in the transportation business. And on a good night, you’re going to several different places. Some songs do it all in one, some songs do it in clusters and are engineered to do it that way.”

“It has personal power,” says Hart, who sees the song as an anthem “to be able to take on your responsibilities of the world, and you are it. You don’t have to look around to other people, because you are it. It’s a beautiful song. It’s a very uplifting, powerful song, and it’s fast, really brisk, and we can improvise.”

The rest of the band leaves for Hart and Kreutzmann’s instrumental odyssey, which combines drums and electronic sounds. Before the show, one of them will call a theme. “Some nights it’s the water theme, with the dolphins and whales,” says Hart. “Other times we’re in outer space with the cosmos. It’s the one part of the show that’s truly improvisational. Bill and I have always kept it that way.”

The band decided to close out with its biggest hit, a message of survival it wanted the crowd to hear. For Mayer, it’s a “full circle” experience — it’s the first Dead song he heard on MTV: “Now I’m on the other side of the portal, looking out from the world I used to look into. What is more magical than that?”