For fans of Gruff Rhys — Super Furry Animals frontman, Neon Neon singer and a prolific solo artist in his own right — his use of cue cards has been a staple at his live performances for over a decade. Often comedic and thought-provoking, the cue cards became a method for the admittedly socially awkward Rhys to both engage with and avoid interacting with his audience.

“Suddenly there was little pressure for me to communicate with the audience, when all I was interested in was writing and singing songs,” Rhys says. “Which was just as well as I had very little in the way of social skills and couldn’t speak very clearly or look an audience in the eye, and I wasn’t interested in people having a good time.”

The cue cards and how they influenced crowd psychology became the focal point of Rhys’ 2018 one-man-show called Resist Phony Encores!, which the singer has now expanded into “a selective memoir in the form of graphics, images, and mass communications.”

Resist Phony Encores!, written by Rhys alongside his longtime visual collaborator Mark James, charts the Welsh singer’s long career through words, photographs and cue cards, from his stint in a Welsh language punk group to the beloved Super Furry Animals to his steady flow of solo LPs. 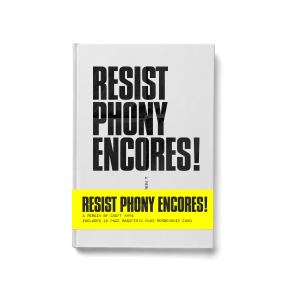 “It took about three days to write and two years to refine. But in a way the subject matter began 15 years earlier when I started to use cue-cards as part of my live show,” Rhys tells Rolling Stone of his “graphic memoir.”

“It started when I was offered a week of shows at the Edinburgh festival in 2018. I decided to do a slideshow based on my experiences with audiences – with songs thrown in too. The book is like the show with the songs taken out and only the between song anecdotes left intact. But it’s still structured like a concert – only without an encore!”

Working off the slideshow, Rhys and James expanded Resist Phony Encores! to 144 pages, with the resulting book due out February 9th, 2021 via Hat & Press. “I needed to keep things short and sweet in the live show. Especially the more complicated references to crowd psychology,” Rhys says I allowed myself tangents in the book that would have lost a live audience. Losing a crowd or getting a drunk audience turn on you is not the best place to be.”

In addition to an outsider retelling of Rhys’ career, the book also details the progression of the cue cards themselves, from simple audience requests (Applause! Louder! Thank You!) to more absurd demands. (Wild Abandon! Burger Franchise Opportunity! Fuck Off Everyone!) In one of the book’s anecdotes, Rhys reminisces about the time Paul McCartney joined Super Furry Animals onstage while Rhys held a “Tax the Rich” cue card.

Comparing the challenges of writing a book to songwriting, Rhys said, “Maybe songs are more fun in that you can be really playful and not spend all day on it – more like solving a crossword puzzle – but then to write a good song you have to be really concise – which is really tricky. Whereas with a longer book you can mainline coffee from 9 am till and midnight and ramble on as long as you like – but then you have to proof read and verify facts and things like that which doesn’t really come into song writing. You can use incorrect spelling and really mangle and destroy language in songwriting in a way that seems completely acceptable.”

Resist Phony Encores! is available to preorder now ahead of its February 9th release; the first 500 orders will receive a limited-edition set of 10 postcard-sized “cue cards.”