More than 20 years after Damon Albarn and Jamie Hewlett first conceived of , the visual history of the cartoon band will be explored in an expansive “almanac” due out this October.

The Gorillaz Almanac, published by Z2 Comics, will feature 120-plus full-color pages featuring Hewlett’s artwork for the band. The hardcover book will also boast exclusive new artwork, the first-ever comic strip starring 2D, Noodle, Murdoc Niccals and Russel Hobbs, plus “puzzles, games and a raft of special guest appearances from Gorillaz collaborators past and present.”

“Every fan of comics and animation has dreamed of seeing the Gorillaz make their comic book debut, with the Z2 team chief among them,” Z2 publisher Josh Frankel said in a statement. “The artwork, the music, and the mythos all add up to what is destined to be one of our most buzzed about releases in history, and when fans see just what we have planned, I know everyone will agree it was well worth the wait.”

“An almanac is an annual book that is a treasure house of useful information like weather forecasts, tri and puzzles and games,” Z2 Comics’ Sridhar Reddy tells Rolling Stone. “They used to sell almanacs at school book fairs, but I’m pretty sure the internet killed the concept of collecting information into a single published volume. It’s what I love about doing a Gorillaz almanac, in that it brings together so much of the ephemera of the band into a physical book that you can kick back with, take a fun deep dive and listen to great music while you’re doing it. It’s consistent with the band’s ethos of immersion.”

Hewlett previously released an “almanac” for his beloved comic series Tank Girl in the mid-Nineties. With two decades of Gorillaz work to cull from, Hewlett tells Rolling Stone how his characters have changed from their self-titled LP in 2001 to 2019’s The Now Now.

“Twenty years of drawing the same characters you cant avoid change, I think I tried to draw more realism into them around the 4th album but now I find myself looking back at the original style, which reminds me of 1970’s Hannah Barbera cartoons which I grew up on,” Hewlett said. “Ultimately I would love to create an animation style as good as Chuck Jones’s style during the late 70’s. Also, I can afford to buy better pens now.” 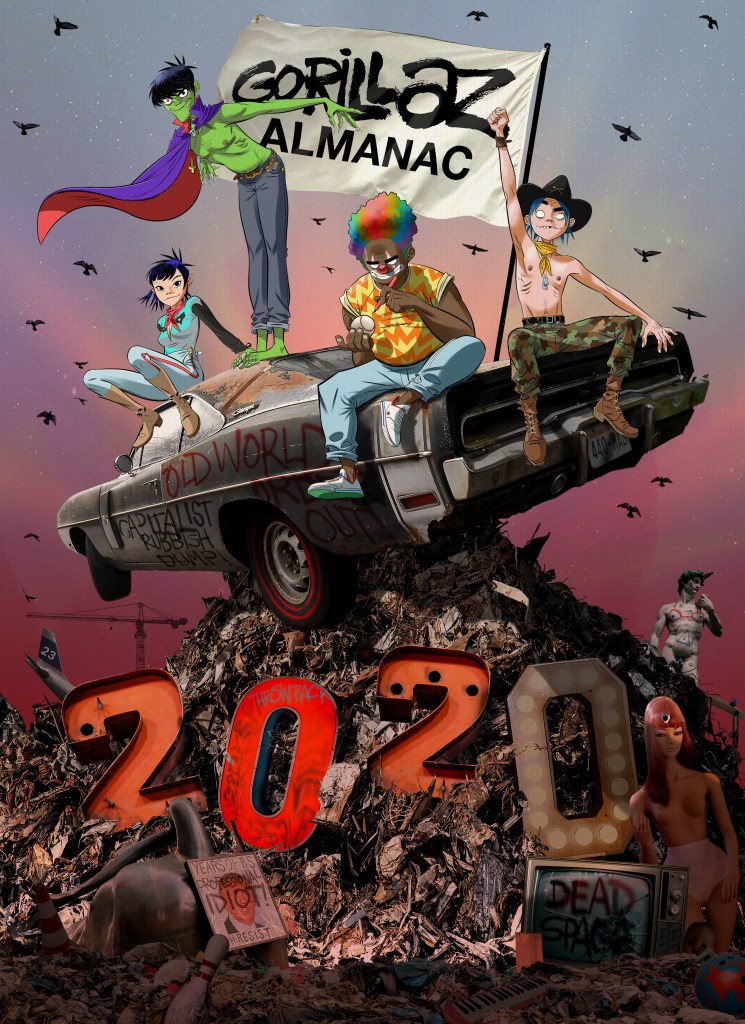 In recent months, both the visual and audio sides of Gorillaz reactivated for the group’s Song Machine project, which has so far resulted in the release of “Momentary Bliss,” “Desole,” the Peter Hook-featuring “Aries” and “How Far?,” with Albarn’s longtime collaborator, the late Tony Allen. Albarn and the band’s 2D also recently staged the first-ever Gorillaz duet on Jimmy Kimmel Live. The Gorillaz Almanac is available to pre-order now ahead of its October 16th release.

“The integration of comics/animation with the live world stretches back decades, from Gene Kelly dancing with Jerry Mouse to the groundbreaking Who Framed Roger Rabbit,” Reddy said. “But my friends and I were also those kids who grew up with dark British music, where Joy Division, David Bowie and the Cure painted apocalyptic visions in our heads. Combine that with the influence of 2000 AD, Heavy Metal and Moebius comics and you had a generation of kids where Roger Rabbit just wasn’t connecting, and the music comics being put out at the time were just bands playing superheroes with flaming guitars.

“When Gorillaz arrived on the scene, it was a confluence of all the ‘outsider’ elements of art and music and it immediately felt like home,” he adds. “They’d cracked the code, so to speak, and over the years they went from cartoons to fully-formed characters with backstories, geographies and motivations. A comic book seemed like a natural destination, and we’re honored the band chose us to make that happen.”