The 2021 Global Citizen Festival is upon us, with hundreds of artists, activists and advocacy organizations working together this weekend to inspire awareness, seek unity and bring about global change.

Ed Sheeran, Elton John, Billie Eilish, Stevie Wonder, Shawn Mendes and BTS are among the performers donating their time for the event, which takes place over a 24-hour period beginning Saturday.

What Is the Global Citizen Festival?

The Global Citizen Festival is one of the main outreach events and initiatives for Global Citizen, an organization founded in 2008, with a goal of ending extreme poverty in the world by the year 2030.

UFC 266: How to Watch Volkanovski vs. Ortega Live Stream Online on ESPN+

The music festival, dubbed “Global Citizen Live,” is part of Global Citizen’s overarching Recovery Plan for the World, a year-long campaign to help end Covid-19 by calling on governments, philanthropists, and the private sector for financial commitments to help “kickstart an equitable global recovery.”

When Is the Global Citizen Festival? Date, Start Time, Tickets

The Global Citizen Music Festival 2021 officially kicks off on Saturday, September 25 at 2pm ET / 11am PT.

Tickets to the show are selling out quickly, but we’ve spotted good seats still available via VividSeats.com for the show at The Great Lawn, in New York’s Central Park, and for the Greek Theatre in Los Angeles. Vivid Seats has tickets starting from just $18 as of this writing.

Doors will open at 2pm ET for the show at Central Park, with performances beginning around 4pm ET. Doors for the Greek Theatre show open at 5:30pm PT, with artists taking the stage in LA at 7pm PT. Be sure to check the venue’s latest Covid rules and regulations before heading to the event.

Who Is Performing at Global Citizen Live?

Global Citizen Live is one of the most ambitious live events ever produced, with artist performances spread out over six continents and multiple time zones. Here is the current list of performers by city (though organizers have promised some surprise guests as well).

Lagos: Performances by Femi Kuti, Davido, Tiwa Savage, and Made Kuti; and appearances by Ebuka Obi-Uchendu and Nancy Isime.

Rio de Janeiro: Performances by Alok, Criolo, Liniker, Mart’nália, Mapu, Aldeia Mutum of the Yawanawa, and Owera (Kunumi MC); with special guests Tropkillaz and Mosquito; and an appearance by Dedé Teicher, in partnership with Rock In Rio.

Sydney: Performance by Delta Goodrem; and appearances by Celeste Barber and Cathy Freeman.

A number of artists will be performing from sound-stages and locations across the world. While they will not appear in-person at the concert venues, their performances can still be live-streamed online.

Broadcast Performances from Around the World: Andrea Bocelli from Tuscany, BTS from Seoul, Green Day from Los Angeles, Keith Urban and Ricky Martin from various locations in Las Vegas, Lorde and My Morning Jacket from various locations in New York City, Metallica from Louisville, Sho Madjozi and Muzi from Johannesburg and, in partnership with Sony Music Latin, Camilo from Madrid and Lali from Buenos Aires.

How to Watch Global Citizen Festival on TV

The Global Citizen Festival will air live across the world, on major television networks like BBC in the United Kingdom, Sky & TV8 in Italy, TF1/TMC in France, TV Azteca in México, and Zee TV in India, among others. TV coverage will vary in terms of start time and coverage here in the U.S.

If you don’t have cable, there are ways to watch the Global Citizen festival and all the musical performances online.

We love the ease and convenience of fuboTV, which gets you 100+ live TV channels that you can stream online. fuboTV is one of the few online streaming services that offers both ABC and ABC News Live, which will let you watch the Global Citizen musical performances online.

Right now, fuboTV is offering a 7-day free trial that you can grab here in time for Saturday, to watch Global Citizen Live online free. You can cancel your subscription at any time within the week and you won’t be charged.

You already know Hulu for their countless hours of on-demand shows and original programming (think Nine Perfect Strangers and Selena Gomez’s Only Murders in the Building). But the streamer’s Hulu + Live TV plan takes it up a notch, giving you unlimited access to their shows and movies and live TV streaming to 75+ channels.

Hulu + Live TV has ABC as one of their live TV channels, so if you’re already signed-up for the service, you can watch the Global Citizen Festival on Hulu. Not a Hulu subscriber? Grab this 7-day free trial to Hulu + Live TV and use it to stream all the performances from Global Citizen Live for free online.

After that, you can stay with Hulu + Live TV at its current reduced rate of just $54.99/month (regularly $64.99+). This is the best Hulu streaming deal we’ve seen online yet.

Vidgo is one of the newer streaming options online but it’s become a hit with cord cutters thanks to its new $10 deal, that includes 90+ channels of live sports and entertainment. ABC is one of the networks available on Vidgo, so you can use Vidgo to watch a live stream of the Global Citizen Festival online.

Vidgo is currently offering a 3-day free trial to test out the service, which you can grab to watch Global Citizen Live online free. After that, try Vidgo out for just $10 for your first month. Price goes up to $55 a month after that.

All of the above services — fuboTV, Hulu and Vidgo — will get you a free live stream of the Global Citizen Music Festival, when you log-in with your subscription or sign-up for one of their free trials. You’ll have unlimited access to watch the Global Citizen Festival online free from start to finish. 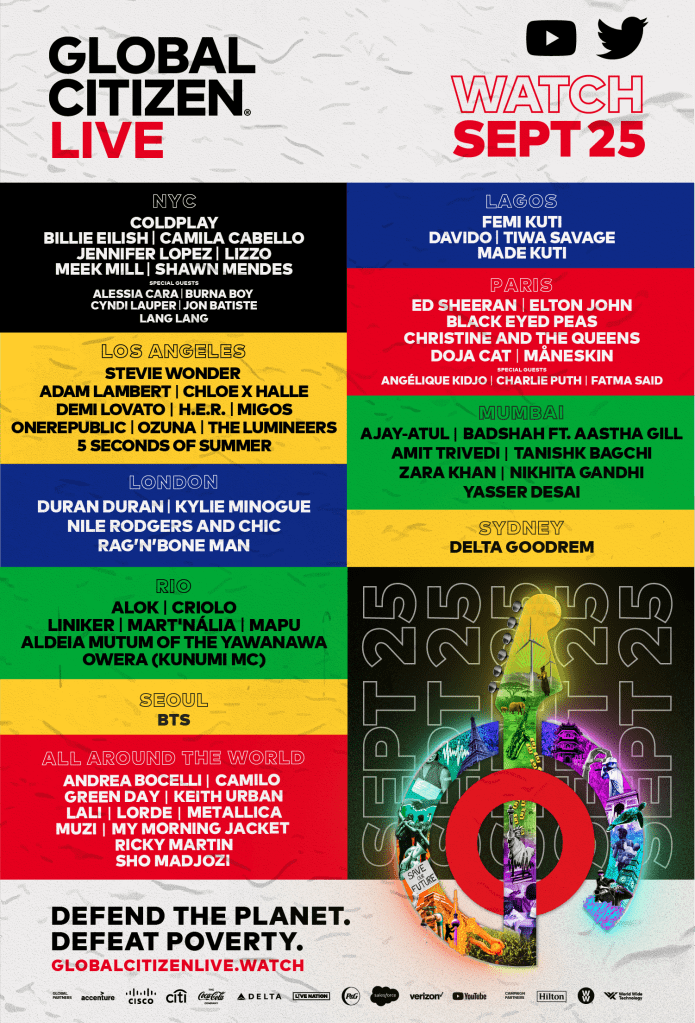 What Are the Goals of the Global Citizen Festival?

While the Global Citizen Festival promises to be full of memorable performances, there is a larger goal in mind. The organization says the artists and presenters are teaming up to call for accountability and action from leaders in the G7 and EU. Among their demands: for the G7 and EU to share at least one billion Covid-19 vaccine doses immediately with those most in need; for the wealthiest nations to give $100 billion annually to address the climate needs of developing countries; to encourage businesses to help curb emissions through joining the Race to Zero and planting one billion trees by 2022; and for the G7 and the world’s billionaires to end the hunger crisis by contributing at least $6 billion “for the urgent provision of millions of meals for the 41 million people on the brink of starvation.”

Is Global Citizen a Non-Profit?

While Global Citizen works with world leaders, it is considered an “advocacy organization” rather than an NGO. Global Citizen is also registered as a 501(c)(3) nonprofit, according to CharityNavigator.org.