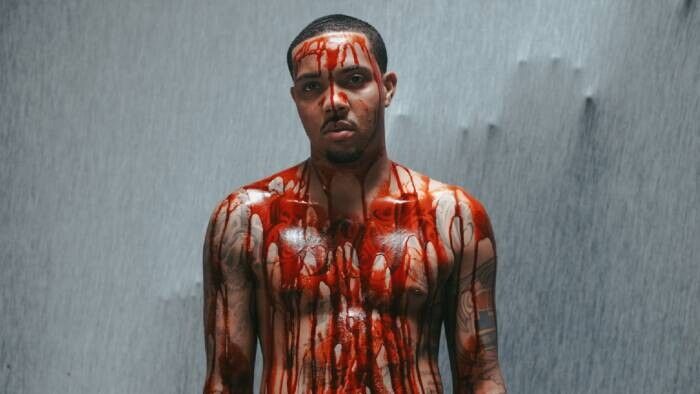 The intense visual intercuts surreal imagery with moments of raw intensity. Herbo raps to the camera from a barber’s chair and behind a diamond-encrusted mask often flanked by a giant ice sculpture of the title, 25. The clip captures the caustic nature of the track as he cuts through the production with one lyrical incision after another. For as ominous as it may be, it notably boasts what may be the most special guest of his entire career—his son Yosohn.

25 recently crashed the Top 5 of the Billboard Top 200. It not only became his second straight bow in the Top 10 of the chart, but it also emerged as his highest debut yet. It has amassed over 182 million streams and earned widespread praise. Starring on its latest cover, KAZI Magazine went as far as to christen him “Chicago’s Street Rap Messiah,” and HYPEBEAST dubbed it, “Arguably the rapper’s most vulnerable record to date.”

G Herbo opens up like never before on the record. Complex hailed it as “a confessional album that opens a window into his world at the quarter-century mark.” His raps rip deeper, while the hooks hit harder than ever. He’s delivered a project that speaks to the struggles of the Windy City and this generation while showing it’s possible to build an empire.

As such, G Herbo has assembled his biggest, boldest, and the best body of work to date with 25. Among these 19 tracks, he recruited a cohort of A-list collaborators, including Polo G and Lil Tjay on “Cry No More,” 21 Savage on “T.O.P.”, and The Kid LAROI and Gunna on “You Can’t.” Through and through, his authoritative flows, incisive choruses, and raw heart shine.

He bulldozed a path for the project earlier this year with “Break Yoself,” and “Really Like That.” The FADER attested, “The tracks feel like siblings with their gunmetal-black sounds and visions of violence and wealth, though I can imagine turning up to ‘Really Like That’.” Plus, 25 boasts the fan-favorite “Statement,” nearing 10 million streams.

G Herbo is back, and he’s ready to flip the game upside down once and for all on 25. Merch including T-Shirts, Hoodies, and CD’s are available to shop HERE.

About G HERBO
After quietly grinding for years out of his native Chicago, G Herbo established himself as not only a platinum-selling, chart-topping phenomenon, but also as a staunch mental health advocate and proponent for change in the black community. Following a string of acclaimed projects, his critically celebrated third album PTSD bowed at #7 on the Billboard Top 200, received praise from Rolling Stone as “his most vulnerable album to date,” and yielded one of the most important songs of 2020—the platinum-certified title track “PTSD” [feat. Juice WRLD, Lil Uzi Vert, & Chance the Rapper]. Additionally, he launched the Swervin’ Through Stress youth mental health program which was recognized by Forbes 30 Under 30. To further his commitment to championing these causes, he is also remodeling an old, shuttered, public elementary school into a community center in Chicago. In 2021, he reached new heights yet again. His fourth full-length offering, 25, soared to the Top 5 of the Billboard Top 200, marking his second consecutive Top 10 and highest debut to date. Racking up hundreds of millions of streams right out of the gate, Pitchfork attested, “As Chicago’s G Herbo has gotten older, his music has become more urgent,” while he adorned KAZI’s cover. Simultaneously, he appeared on multiple #1 albums such as Pop Smoke’s Faith [“Run Down”] and The Kid LAROI’s F*CKLOVE3+:OVER YOU  [“Don’t Leave Me”] as well as collaborating with Dave East and Harry Fraud. With a larger-than-life fanbase, G Herbo has shared the stage with everyone from Miley Cyrus to Marshmello.

G Herbo remains a pillar of hip-hop and the culture.