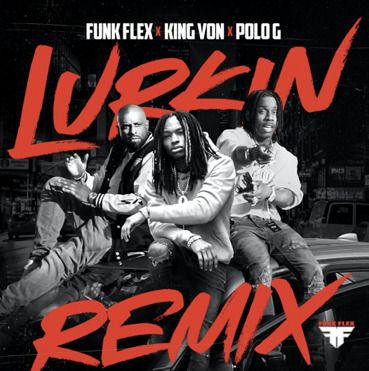 Following the success of his original “Lurkin” record along with late Chicago rapper King Von, Funk Flex releases his new visuals of the remix featuring platinum selling, chart topping artist Polo G. Flex has also announced an upcoming full project, Funk Flex Presents: The curation 001, slated for a fourth quarter 2021 release. The project will be a continual series of curated projects featuring some of the hottest, current and relevant talent.

Being known for his keen ear and ability to recognize and break the industry’s best upcoming records and artists, the radio heavyweight is honoring the late Von with the release of the “Lurkin Remix” by featuring fellow Chicago native and King Von’s friend Polo G. Just one week before his passing, the Windy City rapper collaborated with the late artist in his  “The Code” visuals.

The Juggernaut directed video features original takes and images of the previously released video while showcasing Polo G’s heavy hooks and ability to bring his own style to the notable song. Coming off a number one spot for his album Hall of Fame, Polo G pays his respects to his late friend whom he described as a legend and dubbed him as the King of Drill. Both sharing the experience of getting to work with the rising star before his passing, Funk Flex and Polo G’s new rendition of the track only further honors the late rapper’s legacy.