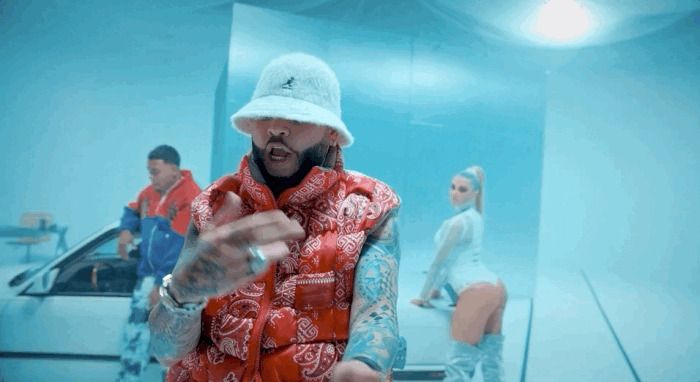 Pushing the genre forward with his versatility and deep musicality, Farruko is one of the most vital artists on today’s Latin music scene. Today, the Sony Music Latin Artist and  Carbon Fiber Music co-founder shares “Premium,” a 2-pack of singles that shows his range. The package contains “Oh Mama,” a song with Puerto Rican rap star Myke Towers, and “XOXA,” featuring Dominican dembow boss El Alfa.

A romantic ballad with moody saxophones, reverbed guitars, and an insistent snare drum, “Oh Mama” is a contemporary Latin trap ballad equally suited to club nights or intimate moments. Demonstrating the chemistry that has fueled numerous collaborations between the two Puerto Rican artists, most recently on the remix for Farruko’s Billboard Hot 100 hit “La Tóxica,” Farruko and Towers address the object of their affections with nimble vocals. Farruko ably switches from hard-nosed raps to gentle croons in his verses and his infectious hook, while the brashly confident Towers serves up rapidfire rhymes in his signature baritone. In the Fernando Lugo-directed video, premiered earlier this week on Telemundo, Farruko welcomes Towers into his world of fast cars and beautiful women, as they cavort in a serene swimming pool and a garage full of collectible hot rods.

Meanwhile, “XOXA” is a mutating, multi-part banger that offers a tour through the history of contemporary Latin music, from traditional balladry to radio-friendly reggaeton to fiery dembow and back. The song kicks off with a showcase for Farruko’s pipes, as he croons atop gentle acoustic guitars until the reggaeton riddim drops and he switches to his lower register. Not content with two beat switches, “XOXA” transforms a third time during the entrance of guest star El Alfa, ratcheting up the tempo to satisfy even the most dedicated dembow stans in the Dominican Republic. Also directed by Fernando Lugo and premiered by Telemundo, “XOXA” is as playful and wide-ranging as the song itself. Starting with a fight in an East Asian hookah bar, the video finds Farruko and El Alfa trying on dozens of costumes to fit increasingly absurd situations–highlights include Farruko doing his own version of Napoleon Dynamite’s film-ending dance (the video also features references to The Mask and Rocky), Farruko and El Alfa dressing up as traditional showmen in a bachata band, and much more.

The “Premium” package continues a busy year for Farruko, highlighted by momentous wins at the 33rd annual Premios Lo Nuestro Awards (“Collaboration of the Year – Pop” and “Song of the Year – Urban/ Pop” for his global anthem “Si Me Dices Que Si” featuring Reik and Camilo). Earlier this month, the 29-year-old artist connected with Ñengo Flow for the apocalyptic and operatic “Burros De Salitre,” and at the start of 2021, he hopped the remix to “Natti, Karol, Becky” with Jon Z, Natti Natasha, and many others. The Latin GRAMMY-winning superstar rode into 2021 on a wave of momentum from his recent hit “La Tóxica,” his tenth song to reach the top 10 of Billboard’s Hot Latin Songs chart, and the remix to Sech’s Latin hit “Relación,” which also featured J Balvin, Daddy Yankee, and Rosalía.

The artist’s most recent album was 2019’s Gangalee, which was an in-depth exploration of Farruko’s roots and the origins of the reggaeton genre. Gangalee debuted at #2 on Billboard’s Hot Latin Albums chart, reached the Billboard 200, and was certified 7x multi-Platinum. The album was home to singles like “Delincuente” ft. Anuel AA (over 200 million views on YouTube), “La Cartera” ft. Bad Bunny, and the global megahit “Calma” (Remix) w/ Pedro Capo, which reached #75 on the Billboard Hot 100, was recently certified 25x multi-Platinum by the RIAA, racked up over 2 billion YouTube views, and nabbed Alicia Keys for the English language remix.

Stay tuned for much more from Farruko in the coming weeks.