Crosby, Stills, Nash, and Young will celebrate the 50th anniversary of Déjà Vu this spring with an expansive reissue, out May 14th via Rhino.

The box set will span four CDs and one LP, containing the original record, unreleased demos, outtakes, and alternate takes. Its packaging replicates the original album’s deep-brown leather-like sleeve, paired with a hardcover book including rare photos and liner notes by Cameron Crowe. A deluxe five-LP vinyl version of the set is now available for preorder at CSNY50.com.

Ahead of the release, the label shared an unreleased demo of Neil Young’s “Birds” recorded with Graham Nash, which you can hear below. It opens with Young strumming a guitar, to which Nash softly asks, “Are you sure you’re completely in tune?” in his polite British accent.

“I know it’s just me and Neil doing it with his acoustic guitar, but that’s a beautiful piece of music,” Nash tells Rolling Stone over the phone from his Manhattan apartment. “It’s me trying to be the best harmony singer I can be with somebody of the stature of Neil Young. I don’t want to stick out singing extra words that he’s not singing. I have to be on my game. And ‘Birds’ is a perfect example of that.”

The box set arrives 51 years after the landmark album’s original release on March 11th, 1970. It was delayed by the pandemic and the inevitable difficulties that arise when a group has broken up and relations among the members are strained. It was produced by photographer-archivist Joel Bernstein and Rhino’s Patrick Milligan, with each band member voting for their respective songs, yielding 38 bonus tracks in addition to the original album.

David Crosby, who recently sold his catalog to Irving Azoff’s Iconic Artists Group, admits he wasn’t directly involved in the project. “Eh, I’m happy about it,” he says during a recent phone interview. “But I don’t have a dog in that fight, really. I sold my piece. I am very proud of the record, [but] this is like a repackaging. It’s probably a good thing, but it’s not that big a deal to me. The guy who looks backwards and does this kind of stuff is Nash. He always has been. I don’t really give much of a shit about that.”

Young originally contributed several bonus tracks but ultimately removed them, leaving “Birds” and a stunning “Helpless” on harmonica. “We found out during the Déjà Vu record just who Neil was and just how strong an individual personality he has,” Nash says. “And to this day, Neil does what he wants to do. We have to respect each member’s desires, and his desire was to not put on two or three of his songs.”

Still, the box set is packed with gems and highlights, including Nash and Joni Mitchell’s intimate “Our House” duet on piano (he screws up halfway and exclaims, “Shit!” with Mitchell erupting in laughter), the Stills rarity “Ivory Tower,” and a 10-minute alternate take of Crosby’s “Almost Cut My Hair.” A version of “Know You Got to Run,” taken from the supergroup’s first session at 3615 Shady Oak Road — Stills’ Studio City home, which he famously rented from Peter Tork — also appears.

Heard for the first time is the second take of “4 + 20,” which Stills had recorded to correct a flubbed line from the first attempt. Now, fans can hear Stills smoothly singing, “I embrace the many-colored beasts” in the third verse without the catch in his voice between “I” and “embrace” — but the take isn’t nearly as emotional and raw.

According to Nash, he and Crosby persuaded Stills to go with the first take. “I’ve done songs where we’ve been into 50 takes, and after a dozen, you’re not singing the same song,” Nash says. “You’re not into it the same way as you are when you first do it.” Adds Stills over a Zoom call: “They didn’t convince me. I pretty much realized that it had a dramatic quality to it, but they said, ‘Do another one just to be safe.’ So I did another one, and now you’ve got both of them. This one is orange and that one is green. Of course, they’ll tell me that I’m completely wrong and I have it backwards, which is pretty much par for the course.”

Demos of Crosby’s “Song With No Words (Tree With No Leaves)” and “Laughing,” two tracks that would wind up on his solo debut If I Could Only Remember My Name, are also featured. Crosby wrote the latter as a message to George Harrison after the musician met a guru and became introduced to Hinduism. “I wanted to tell him, ‘Take it with a grain of salt, because anybody that tells you they know who God is, is usually a scam,'” Crosby says. “I was chicken because it was George and I fucking worshiped the Beatles, and I still do. So I wrote that song to him to say, ‘Listen, I don’t think people who tell you they know what’s going on actually know what’s going on.’ The wisest person I’ve ever seen was a child just playing in the sun.” 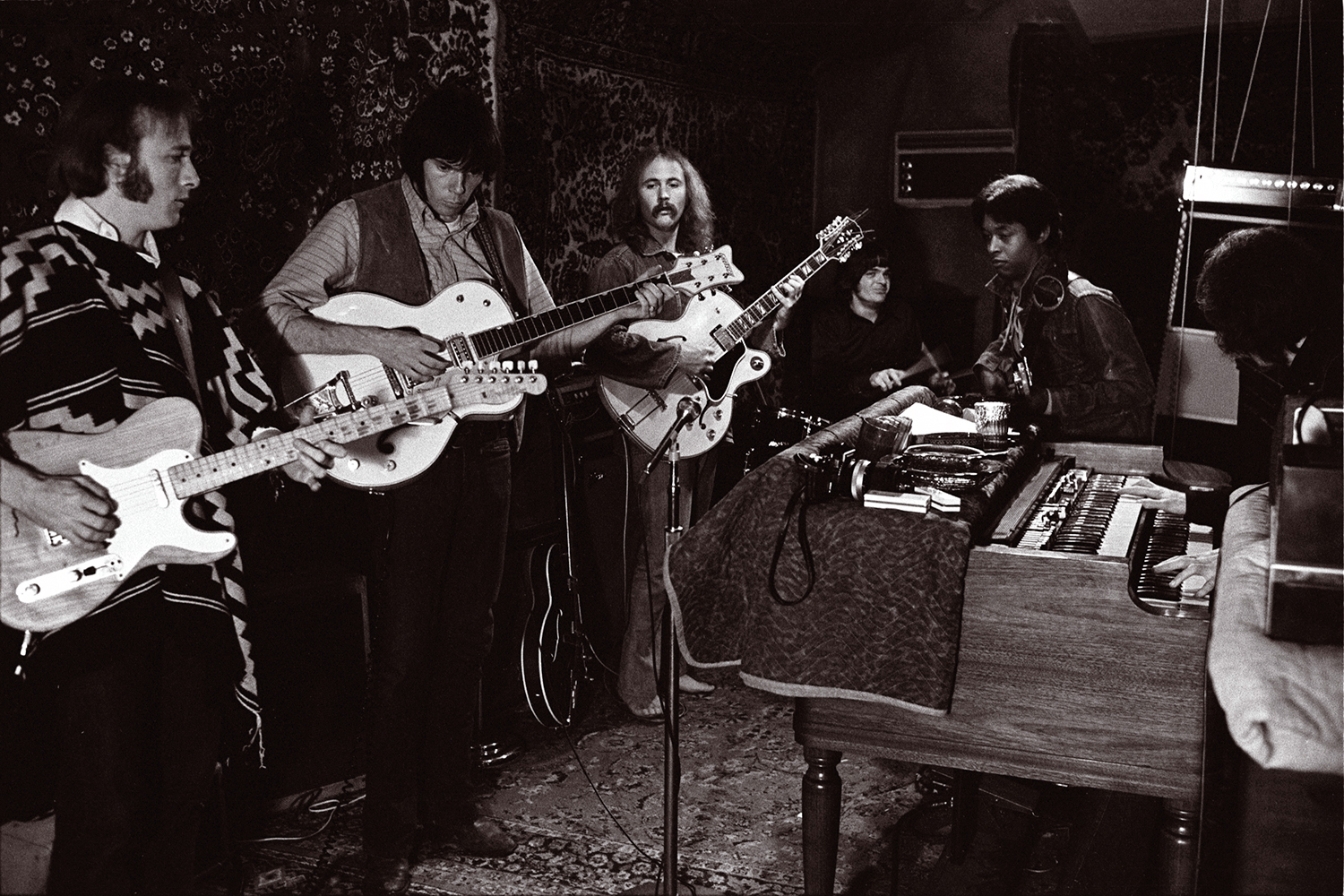 Crosby, Stills, and Nash’s 1969 self-titled debut is packed with sunny harmonies and lyrics about love and the counterculture, but things began to sour by the time they worked on the follow-up, with each member going through emotional turmoil — especially David Crosby, whose girlfriend at the time, Christine Hinton, was killed in a car accident. “The difference between the CSN record is that I was in love and living with Joni, Stephen was in love with Judy Collins, and David was in love and living with Christine,” Nash says. “But by the time the Déjà Vu record came around, Christine had been killed, Joni and I weren’t together anymore, and Stephen and Judy weren’t together. So right now our own personal lives are in complete disarray, and we have to make this record.”

“We tried not to let it take over the album altogether, but it was hard not to,” Stills says of the dark cloud that had surrounded the group. Adds Crosby: “I was devastated by that girl being killed and I had no equipment to deal with it, and it was pretty freaking crazy.”

When they decided to add a fourth member, Young wasn’t their first choice. John Sebastian, Steve Winwood, and Jimi Hendrix were all considered — though Stills denies the latter. (“Complete fabrication …,” he says with a laugh.) Atlantic Records’ Ahmet Ertegun ultimately suggested Young, Stills’ former Buffalo Springfield bandmate. “My first reaction was, ‘Are you out of your mind?'” Stills recalls. “He already left the Buffalo Springfield in a lurch. But as I was saying it, I was thinking that that little angular tension that we had was actually kind of healthy. We were glued together with Silly Putty.”

Nash was also reluctant to have Young join the band. “We had just created a wonderful three-part harmony with the first record, and why should we fuck with that?” he said. “I said, ‘I need to meet him to see if I can be his friend, if I can tell him a secret, if I can hang with him.’ I went to breakfast on Bleecker Street here in New York City. And after that breakfast, I would have made him king of the world. He was funny. He was self-deprecating. He was confident. And look at the songs he had.”

With the addition of Young, a new supergroup was born, making its live debut at Chicago’s Auditorium Theater on August 16th, 1969. The quartet was short-lived, breaking up and forming in different iterations over the decades, but Déjà Vu was a new peak for the band, featuring timeless classics like Young’s “Helpless,” Crosby’s “Almost Cut My Hair,” Nash’s “Teach Your Children,” and the Joni Mitchell–penned, Stills-sung “Woodstock” — and the reissue celebrates that. “I feel only pretty much joy at the music that we recorded,” Crosby says. “Man, there was an incredible chemistry, the four of us. Really, really wonderful.”

“When you just listen to Déjà Vu and you appreciate it, you have no idea what went into the making of the record,” Nash says. “This release will give you a great idea of how this record came together. We were all four strong writers. We were all four strong singers. I don’t believe there’s a band in the world with four writers and four singers. And don’t forget, we may be the only original band that’s still around. The Beach Boys and the Grateful Dead and the Rolling Stones aren’t the original bands. Carl Wilson died and Brian Jones died. But the four of us are still rocking, and it’s kind of interesting.”