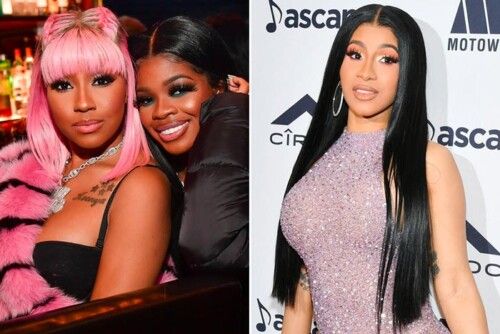 JT and Young Miami are quick to shut down rumors of an alleged beef with Cardi B. As guests on “The Morning Hustle,” the host brought up a claim that Cardi showed no love when City Girls dropped “City On Lock.” But JT jumped to the defense saying, “Cardi did promote our album.” She further elaborated on the fact that it was other fans who were stirring up the pot, making false statements — “It don’t matter if its Cardi fans or Nicki fans. I think they got the two biggest fan bases. They harass you. If you tweet something, they are in your comments talking shit about you. They create these narratives, but it never be a problem.”

So, on the flip side of things, when “WAP” first dropped, Cardi fans didn’t appreciate the fact that City Girls didn’t promote the single – suggesting that JT and Yung Miami were “real quiet.”

One fan Tweeted back saying, “she ain’t being shady, y’all just aggy,” and that’s on period.