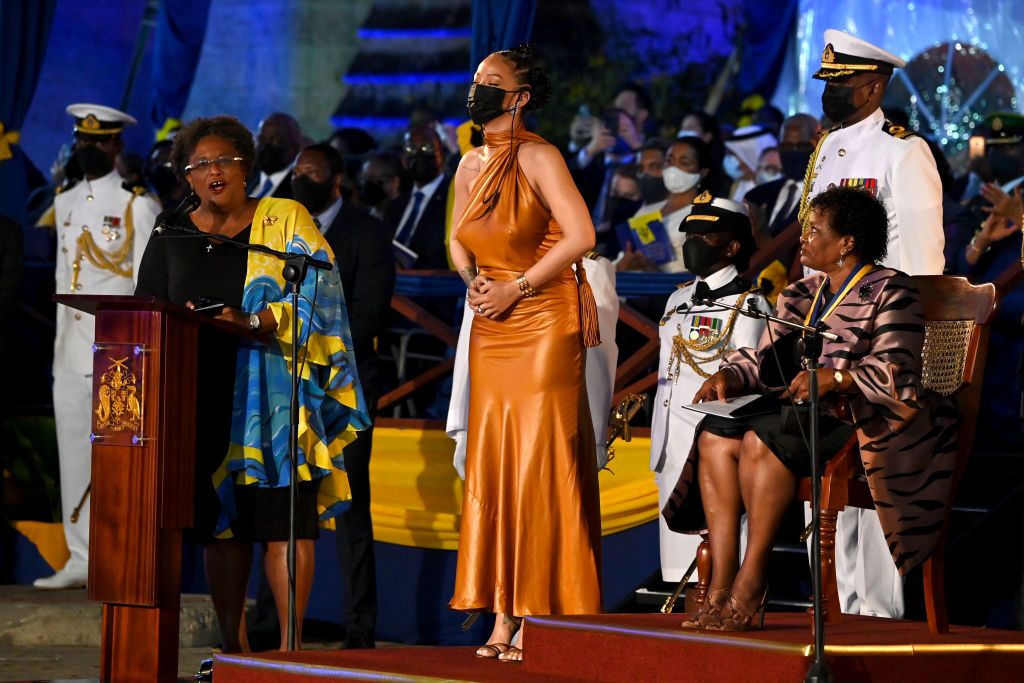 Rihanna has been declared a national hero of Barbados by Prime Minister Mia Mottley. The singer was honored during a ceremony marking the country’s new status as a republic.

Rihanna, who was previously named ambassador to Barbados in 2018, received “the order of national hero” during the event in Bridgetown. Mottley invited Rihanna onstage to accept the honor.

“On behalf of a grateful nation, but an even prouder people, we therefore present to you, the designee, for national hero of Barbados, ambassador Robyn Rihanna Fenty,” Mottley said. “May you continue to shine like a diamond and continue to bring honor to your nation by your words, by your actions, and to do credit wherever you shall go.”

The ceremony was held to commemorate Barbados leaving the reign of the British monarchy after 396 years. Rihanna is the second woman and the 11th person to be declared a national hero of Barbados. The honor allows the singer to use the title “Right Honorable” in front of her name going forward.

Earlier this year, Rihanna officially entered the billionaire’s club. Forbes estimated that the pop star and business mogul — founder of fashion house Fenty as well as makeup line Fenty Beauty — is worth $1.7 billion, making her the wealthiest female musician in the world and the second-wealthiest female entertainer in the world after Oprah Winfrey.

Meanwhile, there’s still no word on when Rihanna will be releasing new music, as her last album, Anti, came out in 2016, prior to her major brand expansions.