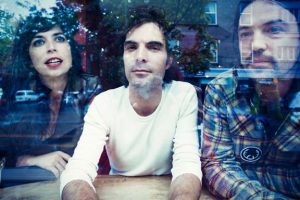 I am driving early morning.

All the weather news the previous night had been about the oncoming storm about to hit the UK. (For all our international readers that translates as strong wind).  The feeling in the air was that it had been and gone, the half-light giving way to a lighter and less stormy future. I am listening to the new Barr Brothers album Queens of the Breakers and it feels like the perfect soundtrack. The music encapsulating that feeling of coming through the other side of a traumatic event, a light at the end of the tunnel, a warm blanket to wrap around you as you stagger out of the dark. Perhaps I should explain…

The Barr Brothers are based in Canada and at their core are a three-piece consisting of the brothers Andrew and Brad Barr with Sarah Page. As a live act these numbers are fleshed out with a myriad of other musicians that create a warm atmospheric sound. The first time I came across them was on a festival stage and they immediately grabbed my attention. The guitarist and singer Brad had a piece of string that ran through the fret board, which when pulled produced a grating sound that was a rather beautiful overlay on the music being played. This effect can be heard on the opening track “Beggar In The Morning” on their debut album The Barr Brothers. This encapsulates what for me the Barr Brothers are all about for me. There are tunes aplenty, but these are all lovingly rendered in atmospheric soundscapes and interesting musical noises.

So how does their new and third album fare? If anything, this is probably their most atmospheric yet. Each song here permeates with layers and feelings so much so that I had no need to especially concentrate on the lyrics in order to ascertain the meaning. This is why it suddenly made so much sense driving early morning after the storm. The whole feel of the music perfectly enhanced that ‘after the storm’ feeling. In truth it heightened my experience. Now I am not saying that you have to find a storm and drive early morning after it in order to appreciate it, but it may be just the perfect album to play to offer you comfort after a stressful day or experience.

Those of you who are familiar with and like early Low Anthem will find a wealth of similar sounds to enjoy. “Song That I Heard” is probably the closest sounding track to them and it also has a Simon & Garfunkel feel. All the songs on this album sound new but are steeped in traditional folk music forms. The first two tracks sound like they have been recorded in the pouring rain and I mean this in a positive way. Just like the rain enhances the feel of the film Rashomon, the soundscape does a similar job here. “Maybe Someday” provides the first change of pace and could almost be considered funky. This gives way to “Kompromat” a rocky blues number with some lovely guitar effects. Then it is back to the laid back atmospheric numbers… “You Would Have To Lose Your Mind” reminds me of the film Lost In Translation. It permeates with restless floaty meandering, all wrapped in slight distortion as if unable to concentrate on it properly. The title track signals a more redemptive feel for the album. All the previous songs were like Linus’s blanket, a warm comfort to help you through. Now the light has permeated through the clouds and there is a more positive feel to the outcome of the day. “It Came To Me” is a full on blues stomper, well as full on as this album gets. There is always that element of comfort rather than attack that exists on this album. The last three tracks carry on this redemptive feel, like waking up on a warm sunny day with a big smile on your face.

Overall, I really love this album. There is not a track I would want to skip and it is one of those pieces of art that you can enjoy from start to finish. Each track has something different to enjoy but it is the make-up of the whole that I find most stunning. It truly is an album of material as opposed to a collection of disparate songs. It just might be the perfect album to provide comfort through these scary, charged, political times or just a bad day. I would suggest that it can almost be considered medicinal. Do yourself a favour and give it a go. I really think you will be pleasantly surprised. As the lyric in the track “Hideous Glorious” says, ‘The best thing I have got and that’s sayin’ a lot’.