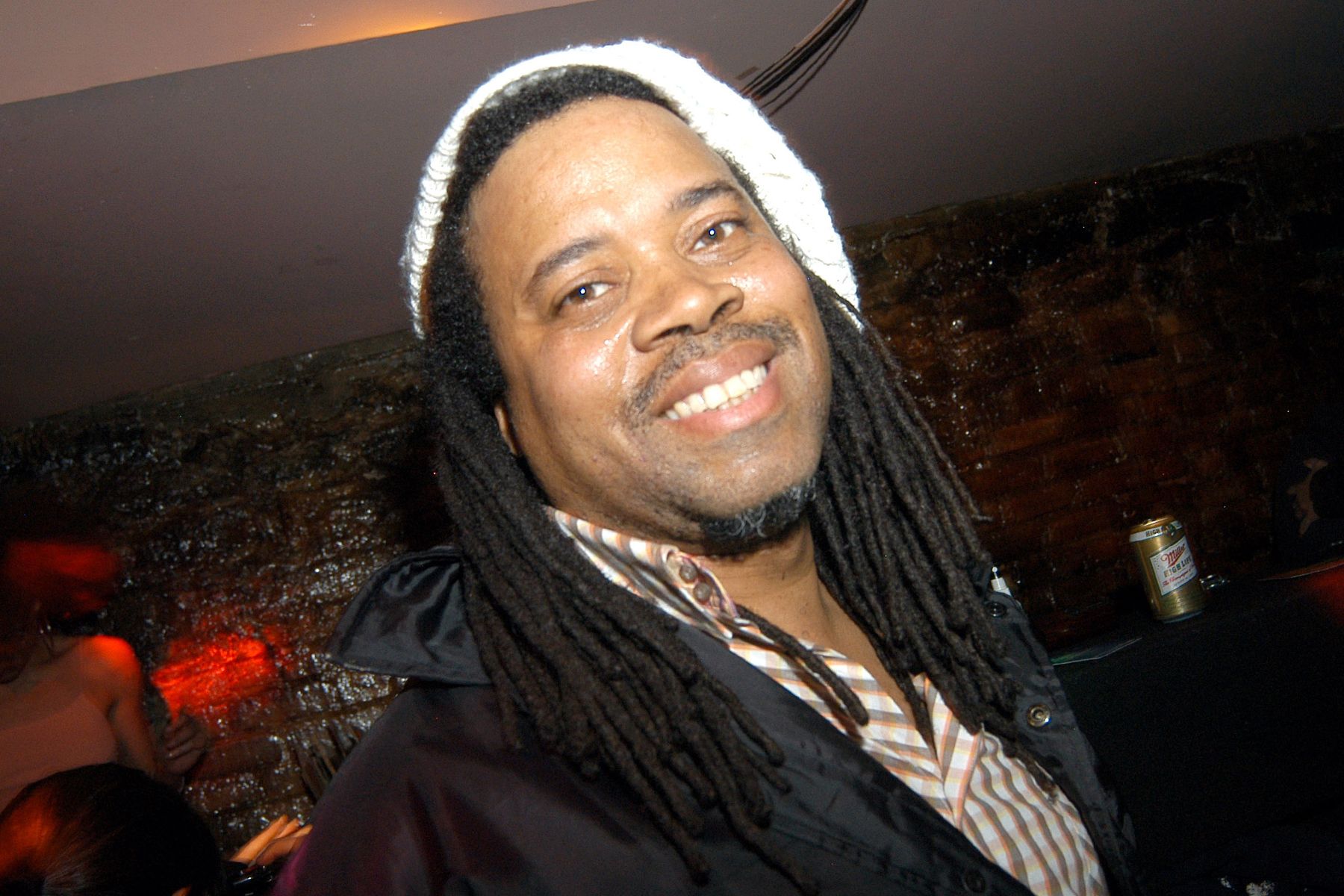 “Hip-hop is ancestor worship,” Greg Tate wrote in The Village Voice in the fall of 1988. He always chronicled music with that fiercely worshipful spirit of sacred ritual. Reading Tate was a revelation, then or now, because he was a writer who celebrated all kinds of music, from every era — an Afrofuturist rebel without a pause. That’s why the news of his death hits so hard today. To sum up his voice, you have to go back to the words he wrote about Chaka Khan back in 1992: “She is to singing what Jimi Hendrix is to guitar playing: the only wail that matters, the roar and the resonance against which all contenders are judged.”

That was Greg Tate. He was a giant of a cultural critic, hugely inspiring and influential to the heads taking music seriously, making you hear the connections between hip-hop, jazz, rock, the blues, every cry of love under the sun. He treated criticism as an art in itself, and in his hands, it was, because he knew how to do justice to the raptures of listening.

That Chaka Khan review — I’ve had it taped up on the wall beside my desk for decades now, ever since clipping it out of The Village Voice, because it’s the perfect tribute to the ecstasies of a being a fan. He calls her voice “a bloodsucking sonic boom, a Coltrane-size eruption that strolls out of her mouth.” As he explains, “A diva’s sound and a diva’s songs become symbolic of the most passionate, most crazed, most erotic, most orgasmic, most funky, most sublime, and most romantic things that have ever happened to the diva’s devotees.” For so many of us readers, Tate was that diva.

He arrived in the Eighties, in the pages of the Voice, with a freewheeling mind that cared not a fig for prejudices of genre or historical period. He blasphemously connected the new rappers with jazz elders — Rakim as Miles, KRS-One as Sonny Rollins, Chuck D as Coltrane Insane. Hip-hop was exploding in those days, evolving with wild new innovations week by week. And Tate was there to put it all in the most erudite intellectual context. A crucial part of being an 1980s rap fan was reading what Tate had to say about it this week.

A guitarist reared on Hendrix, Pete Cosey, Sun Ra, and P-Funk, he co-founded the Black Rock Coalition and played in the NYC freak-jazz ensemble Burnt Sugar. As he put it in one of his greatest critical hits, his 1985 Voice review of the Artists United Against Apartheid Sun City album, he loved wailing guitars “as much as any head-banging slice of Wonder Bread.” For him, free jazz and metal and rap and hardcore punk were coming from the same funky place. Rock radio was dominated by AOR — “Album-Oriented Rock,” or as Tate called it, Apartheid-Oriented Rock. He always wanted to blow those boundaries out of the sky, whether he was writing about Dylan, Hendrix, Nirvana, Basquiat, or Public Enemy.

These were the days when many experts saw rap as a fad, or an aberration from the real story of music. He had a funny story about going to a 1980s buppie party where he asked to hear Run-D.M.C., only to be told, “This isn’t a Run-D.M.C. kind of party.” (As he wrote, “A disco-and-Doritos dipshit party is what it was.”) But after you read Tate, everything was a Run-D.M.C. kind of party — everything was part of his trans-historical, trans-cultural DJ mix. It ain’t where you’re from, it’s where you’re at.

Musicians loved to be written about by this guy, even when he ragged on them, because they could tell he was never bullshitting. When he reviewed the Red Hot Chili Peppers’ Californication for Rolling Stone, Flea admitted he broke down and cried at the honor of being reviewed by Tate. (“If there were a Most Valuable Bass Player award given out in rock, Flea could have laid claim to that bitch ten years running.”) Tate praised John Fruiscante — “the only ax slinger God ever wanted to be a Pepper, too” — but raved, “These evolved RHCP further-muckers are now moving toward funk’s real Holy Grail: that salty marriage of esoteric mythology and insatiable musicality that salvages souls, binds communities and heals the sick. Not exactly your average white band.”

Few writers ever approached Tate in terms of the power to capture the rush, the beauty, the delicious terror of surrendering to music and slipping under its spell. His words always evoked that dance between the Black Saint and the Sinner Lady, especially when faced with an album complex enough to put up a fight. He gorgeously reviewed Kendrick Lamar in Rolling Stone in 2015. “To Pimp a Butterfly is a densely packed, dizzying rush of unfiltered rage and unapologetic romanticism, true-crime confessionals, come-to-Jesus sidebars, blunted-swing sophistication, scathing self-critique and rap-quotable riot acts. Roll over Beethoven, tell Thomas Jefferson and his overseer Bull Connor the news: Kendrick Lamar and his jazzy guerrilla hands just mob-deeped the new Jim Crow, then stomped a mud hole out that ass.”

Tate’s 1992 anthology Flyboy in the Buttermilk: Essays on Contemporary America was a treasure, yet got weirdly lost in the shuffle — soon out of print, impossible to find. (If you had a copy, loaning it out was dangerous, because not only did you suspect it’d get stolen, you wouldn’t blame anyone for trying.) The 2016 sequel Flyboy 2 was equally essential, with tributes to legends like Richard Pryor, Gil Scott-Heron, Michael Jackson, Chuck Berry, and more. But it still just skims the surface of how much great work he left behind him, because he was always speeding into the future.

David Bowie was a huge Tate fan — given Bowie’s musical obsessions and wide reading, it would have been weird if he hadn’t been into Tate. When the Thin White Duke died in 2016, Tate wrote the most passionate of tributes, “The Brother From Another Planet,” declaring, “David Bowie ranks as high in our electric church’s Afro-futurist pantheon of demiurges as Jimi Hendrix, George Clinton, and Miles Davis. That’s for his outrageous aristocratic style, not-just-skin-deep soul, badass brinksmanship, and all-around Alter-Negrocity. Not to mention the Starman’s own sui generis take on The Funk. Bowie remains that rarity — a white rock artist whose appropriations of black kulcha never felt like a rip-off but more like a sharing of radical and bumptious ideations between like-minded freaks.”

One of the most beautiful things Tate ever wrote: an elegy he wrote in 1991, for the Village Voice’s “Pazz & Jop” survey of the year’s music, mourning what he saw as the closing of the Eighties’ wide-open hip-hop dreamscape. As he wrote, “I was not listening for affirmation as a Black Man this year — that hip-hop blanket is as blood-spattered as Jackie O’s dress. What I wanted was to be haunted by other people’s sonic dream states — the kind of intimacy I desire less and less from needy flesh and blood creations. But I also wanted those dream states to be as loud and proud as hardcore hip-hop and just as plugged into the heat-death of the universe.”

That led him to the noise-guitar raptures of Nirvana or My Bloody Valentine, or into the spacey R&B of Seal. “My heroes weren’t about blowing up in ’91, but turning in to da inner sound, providing something for the inner man, and more importantly, the inner woman.” He followed that sound wherever he heard it. “Seal is a warrior for the heart, Kurt Cobain is a warrior for the heart, the Family Stand and Jane’s Addiction are warriors for the heart, meaning they make music that proves you can still go out and kick a little ass with a gaping, bloody wound in your aorta.”

Greg Tate was a warrior for the heart. That’s why he was idolized by those who read him, listened to him, learned from him. He always tuned in to those dream states, and followed them as they skipped through history. What a voice. What a mind. And what a loss. Thanks for your life, Greg Tate.