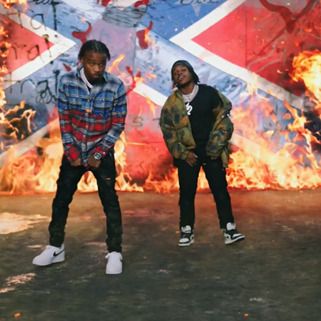 Today, hip-hop artist 42 Dugg unveiled a new music video for his latest single “4 Da Gang (feat. Roddy Ricch).” The powerful visuals breathe new life into the song, which samples German Rock Band Scorpion’s 1982 classic hit, “No One Like You,” and cements Dugg’s status as a frontrunner in the hip-hop scene.

Directed by Spike Jordan, the “4 Da Gang” music video packs an impactful statement, with strong images of a burning Confederate flag and Dugg and Roddy rapping around a bonfire.

Since the song dropped earlier this month – fittingly released on 4/2  – “4 Da Gang” landed on Billboard’s Hot 100 chart and cracked the top 25 on Billboard’s Hot R&B / Hip Hop Songs (No. 28) and Rap / Hip Hop Digital Song Sales (No. 21) charts. The legendary rock record sampled in the song was flipped and produced by TayTayMadeIt, with Dugg and Roddy joining forces to create the hip-hop and rock-n-roll-infused masterpiece.

“4 Da Gang” is the latest in a series of successes for the rising Detroit artist, who was recently announced as one of the performers confirmed for the Rolling Loud Festival, taking place in Miami from July 23 – 25. Dugg is set to perform the first night, sharing the bill with the likes of A$AP Rocky, 21 Savage, Lil Baby and more.

Dugg has blossomed into one of hip-hop’s hottest budding stars with his gritty lyrics, fluid flow and trademark whistle that has garnered attention from a bevy of established and rising stars. He recently appeared on projects including Meek Mill’s Quarantine Pack, Big Sean’s Detroit 2, EST Gee’s I Still Don’t Feel Nun, DDG & OG Parker’s Die 4 Respect and Lil Migo’s King of The Trap, and more.

His profile skyrocketed as he secured two Billboard Hot 100 placements for his collaborations with Lil Baby on “Grace” and “We Paid” — the latter was undoubtedly one of the songs of 2020 and led to Dugg’s first nationally-televised performance at the 2020 BET Hip-Hop Awards. The video for “We Paid” even landed in VEVO’s list of the 10 most-watched hip-hop videos of the year, alongside Drake and Future.

Dugg’s latest project, March 2020’s Young & Turnt 2, debuted on the Billboard 200 chart, peaked at No. 6 on Billboard’s Independent Album chart and earned over 200M+ streams since its release.