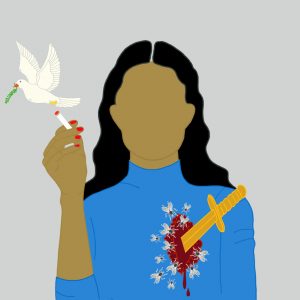 Some weeks ago, at an art people’s dinner, an older man told me that our socio-political situation is bad these days, but certainly not nearly as bad as in the 40s. I am not sure people from Syria, Iraq, Yemen, Libya, Afghanistan, Palestine, etc. would agree. While we were having a lovely dinner, fellow human beings were being put to death en mass so we Westerners can keep our fantasy of a free world alive, and keep our consumption habits as high as our latest credit card allows. Postcolonialism is so deeply rooted in everything we breathe and touch that black and brown lives only matter when their hardships are staged by some fake NGOs and fitting to the mainstream media agenda; imperialism and greed are as strong as ever, even when they wear their Obama, Macron, Merkel or Trudeau’s masks, and we pitifully collect the (often pink-washed) crumbs they throw us.

2017 has been a political shit sandwich with extra MSM vomit on top, not sure I can choose what was the hardest to stomach: the actual horrendous acts by our elected representatives or the BS the MSM brainwash us with. Well, they do go hand in hand, after all, competing for the prestigious title of most murderous and cynical psychopaths (in no special order): our governments, the MSM, the big pharma, the prison-military-industrial complex, agro-corporations, and the banks. Across the political spectrum, and despite fake feuds on Twitter and personal rivalries, make no mistake, they are all out there to get us, exploit us till we die, burn us in some Grenfell Towers, revive us, and milk the rot out of our walking corpses. What baffles me, is how we look down on each other, thinking that we can beat the system by getting a promotion, voting for some power-hungry pussy-grabbers, saying the right thing on the right social media channel, putting ourselves above people of a different skin colour, sexual orientation, gender, physical ability, or nationality. LOL. 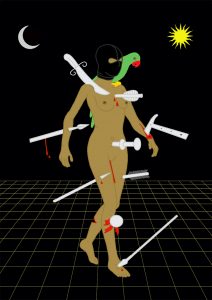 Not singing Kumbaya at all, but for reals, besides the 1%, we are all on this sinking ship together. Your great grandchildren will not breathe less toxic air or drink less polluted water than your neighbours’ on the other side of a giant wall. While we are busy fighting over rigged politics, corporations are adding the final touches to a dystopian environment where soon, only the rich will have clean air, water, and food. We’ll see if your white hood, Tiki torch, and white heterosexual penis make you special then.

Despite the general turmoil, something good has managed to come out of Trump and May’s attempt at a slow-burn genocide of the human race. People start to wake up, something that Hilary’s milder ways of abusing the system wouldn’t have stimulated. And as people wake up, corporations double their cause marketing, social justice newbies start to lecture long-timers, social media platforms and search engines devise new ways to exploit our new-found thirst for alternative knowledge… it is not all easy, but overall I do hope ignorance and abusive habits towards communities will regress.

I mostly live in the woke bubble, surrounded by progressive-ish people; even when I un-friend someone on Facebook for posting sexist garbage, I know that at the end of the day we are, more or less, on the same side. Something else I took away from this year is that as much as possible while preserving our energy and sanity, we must try to educate, listen, and forgive because our passionate and intellectual views of an equal society tend to divide and that’s how the patriarchy gets us. Intersectionality will save the world. Just like Hitchcock’s Birds, when we come together, they won’t be able to stop us. The biggest divide I have observed, still as something blurry and slippery though, is that there seems to be a pink-washed Western side, standing against the other side of the Iron Curtain. For example, if you are pro-peace in Syria, you might end up discussing with anti-LGBTQ folks, while if you are chatting with feminism advocates, you might end up hearing Islamophobic opinions. And there’s, of course, this tired thing of people calling you anti-Semitic if you want justice for Palestine. The MSM weaponize these views and create the perfect propaganda tools to wind us up and make sure we fight among ourselves. This makes me extra angry because it is isolating, it prevents open dialogue and education, and it is just infuriating to be played by the system like dodos. 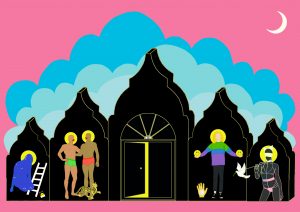 Forty years ago in 1977, in what I personally feel were the last years till the mid 80s when many people were trying to make a stand before finally giving in to hardcore consumerism and to the lure of profit war, and forgetting the promises of the sexual revolution, two iconic disco songs were penned: Stayin’ Alive  and Born to Be Alive. The straight white market had already appropriated disco, and these four gentlemen sang about the dynamic between being an individual and being part of society and enjoying one’s self while surviving life struggles. Can pop music be prophetic? Forty years later, are we reaping what we sowed by carelessly damaging the planet and keeping on stealing from our neighbours in the name of our own survival and enjoyment? Are we going to keep on staying alive, or are we going to live consciously and strive for real freedom while stopping to oppress each other?

Because an image is worth a thousand words and because we all deserve a bit of beauty, Opashona Ghosh has agreed to bring some grace to this piece with her illustrations. We will see more of her work very soon here on Fourculture, till then, I wish you soothing visions of hope and brave New Year resolutions.